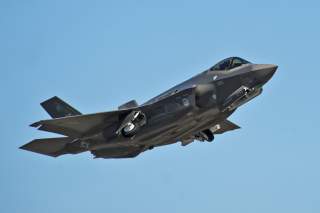 Consider a topsy-turvy set of seemingly contradictory facts regarding Turkey’s planned acquisition of one hundred advanced F-35 stealth fighters, the development for which Ankara contributed one billion dollars.

On August 28, Maj. Halit Oktay was the first Turkish Air Force pilot fly an F-35 from Luke Air Force Base in Arizona.

However, the sale of F-35s to Turkey was put on hold for ninety days by Congress on August 2 as part of a National Defense Authorization Act, pending a report from Pentagon assessing the necessary measures and full costs of cutting F-35 deliveries to Turkey.

Yet—the first delivery of F-35s has already been ‘received’ by the Turkish Air Force in June 2018 and can’t be legally confiscated. However, the aircraft remain on U.S. soil and the U.S. military could technically be forbidden from assisting in their transit.

Still, because the jets weren’t slated for physical transfer to Turkey in the ninety-time frame, the ban has yet to have any real impact. What happens next to Turkey’s F-35s will depend on the Pentagon’s report due in November and how Congress decides to act upon it—as well as any other major developments in what has so far been another poor year for Turkish-American relations.

The problem gets thornier still—ten different Turkish companies are major manufacturers of vital F-35 parts, and Eskisehir, Turkey is set to become the primary regional engine maintenance hub for European-operated F-35s! These considerations led Secretary of Defense James Mattis in July to argue against banning F-35 deliveries because finding substitute manufacturers could delay the global F-35 procurement chain by six to eighteen months.

The possible collapse of a stealth fighter deal that was over a decade in the making has many ingredients. From afar, it is symptomatic of a broader breakdown in relations between Turkey and the West due to the increasing authoritarianism of President Recep Erdogan, a wide-reaching paranoia-fueled crackdown in the wake of a failed military coup in 2016, and differences over relations with Kurdish separatist fighters in Syria.

More proximately, congressional action against Turkey was spurred by the continued detention of U.S. pastor Andrew Brunson on vague charges of being aligned with the coup—with the indictment citing such ‘evidence’ as a video on his phone of the rice dish maklube, whichTurkish prosecutors claim is popular with plotters allegedly tied to cleric Fethullah Gulen. As Gulen resides in the United States, Ankara has been relatively direct in treating Brunson’s detention as a game piece for hostage diplomacy—implicitly offering to release Brunson in exchange for the F-35s or extradition of Gulen. This brazen quid-pro-quo has particularly insighted the ire of Christian conservatives in Congress, however.

However, from the diplomatic-military perspective, the greatest sticking point was Turkey’s declaration in 2017 that it would purchase S-400 surface-to-air missile systems from Russia. As detailed in this earlier article, the Pentagon fears that Turkey’s operation of the S-400 would allow the Russian military to study how the F-35 stealth fighters shows up on a Russian-built air defense radars, and potentially facilitate the infiltration of its computer system. This could compromise the F-35’s effectiveness around the world.

As for Turkey’s involvement in the production of F-35 components, that may ironically continue even if Ankara is denied access to the F-35s themselves. Quite simply, the component business—which may be worth up to $12 billion—may be too vital to Turkish industry to cut off in retaliation. Eventually, TAI hopes to develop a domestic stealth fighter with British assistance.

Another outstanding matter is the presence of thousands of U.S. military personnel at Incirlik Airbase in southern Turkey. Incirlik currently serves as a vital and highly convenient hub for U.S. air operations over Syria targeting ISIS. It also hosts dozens of U.S. B-61 nuclear bombs. However, as the F-35 deal has curdled in recent months, lawyers associated with Erdogan’s AKP Party filed conspiracy charges against former commanding officers of the U.S. contingent and called for the suspension of all flight operations. To give an idea of the rigor behind these charges, apparently, due to the name “John” appearing in a coup-plotter’s mass email, Turkey considers all U.S. diplomatic and military personnel named John to be suspects in the investigation.

Erdogan has yet to show any sign of backing away from the S-400 deal, and instead recently suggested that Ankara would purchase its fighters from elsewhere if the F-35 deal stalls, and wrote in the New York Times that Turkey might have to find ‘new friends and allies.’

This hints at a hypothetical Turkish realignment towards Russia, though in reality the two nation’s interests are not closely aligned. A forthcoming Syrian operation to crush rebels in Idlib province (previously guaranteed as a sanctuary under a Turkish-orchestrated deal) may in fact raise tensions with Moscow. Meanwhile, though Turkish relations with Europe are also deteriorating, European markets remain vastly more lucrative.

Despite increasingly diverging interest with NATO, Turkey remains a critical member—not only possessing the second-largest military in the alliance with over six hundred thousand personnel, but also controlling Russian maritime access between the Black Sea and the Mediterranean via the Bosporous Strait.

Thus, Turkey and the West appear simultaneously riven by intolerable political differences but also bound together by strategic and economic ties that would be extremely painful to cut.  Whether and how the knot surrounding Turkey’s ambition to simultaneously operate both the F-35 and S-400 will be untied remains to be seen, but at least publicly, F-35 manufacturer Lockheed appears confident that congressional opposition to the F-35 transfer will amount to no more than a temporary setback. However, that may be an optimistic forecast given the stubborn tendencies of the administrations in Washington and Ankara.