The Conservative Case for Ukraine 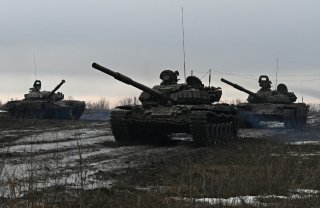 Russia’s invasion of Ukraine is a colossal failure of U.S. leadership orders of magnitude worse than the Biden administration’s humiliating Afghanistan debacle. Worse, it signifies an end to the relative peace and tranquility that Americans have enjoyed since the 1990s. Our ways of preventing wars are no longer effective. The contagion of conflict will spread. More wars are coming. This new era will be more dangerous and chaotic, and it will last for decades.

How should American conservatives respond? Should we hide behind our oceans, or plunge into the fray? The urgency of Russia’s invasion requires a swift answer. The good news: our first principles as conservatives, and our founding purpose as a country, can guide us. Instead of retreating from the world, we can help ourselves by helping our friends: those who share our principles and purpose as a country.

America is the first country on earth created for the specific purpose of preserving liberty. We are also a revolutionary country based on the idea that no king, government, or mob could dispense or revoke individual rights under the “laws of nature and of nature's God.” King George III disagreed with that idea and thousands of Americans died to prove him wrong. Our country and Constitution exist as a result. America’s founding purpose is what makes Ukraine a kindred country today—and it underscores why Russia’s invasion is so detestable.

Ukraine has a history stretching back over 1,000 years. The country that we presently call Ukraine is, practically speaking, a mere eight years old—and still forming. Like America, today’s Ukraine was born of a revolution. In the 2014 “Euromaidan” Revolution of Dignity, Ukrainians ousted Russia’s puppet leaders to create a pro-Western country. Ukraine’s revolutionary claim was the same as our own: that the might of Russia’s money and arms did not make right. Instead of descending into Russia’s kleptocratic despotism, they joined the West. Putin disagreed and thousands of Ukrainians have died since to prove him wrong.

For liberty to flourish in the world, Ukraine must prevail in its fight. Ukrainians may well succeed in defending themselves. Should Putin win, however, the world will witness a crackdown on liberty in Ukraine not seen since the massacre of Tiananmen Square, or today’s high-tech genocide of the Uighurs in China. In the 1930s, Joseph Stalin faced a similar dilemma in Ukraine and he opted to consolidate his rule through a genocide that killed thirty million Ukrainians. Core conservative principles require us to preserve innocent life and liberty and to resist those who claim that their might makes right. This unites Americans with Ukrainians at a foundational level.

Some conservatives disagree and argue that we should stay on the sidelines in Ukraine. Their arguments are fashionable and sometimes pithy, but they are also broken and fallacious. Conservatives can reject these arguments while still respecting those who advocate for them.

One of the more common arguments against Ukraine is the classic “False Dilemma” trap. Here, America’s options shrink to a binary choice between minding its own business or going to war with Russia. This is lazy thinking. The United States has thousands of options for assisting Ukraine and resisting enemies like Russia without going to war. U.S. alternatives are many. We should use them.

A second argument is even more fashionable. It is the infamous “Tu Quoque” ploy which, loosely translated from Latin, means “Says you, hypocrite.” This argument is appealing because it highlights the obvious hypocrisy of Democratic elites who want to guarantee Ukraine’s borders while ignoring America’s. Many things can be true at once: Joe Biden and Nancy Pelosi can be hypocrites, America’s borders can need protecting, and Ukrainians can still be deserving of U.S. help. The Left’s hypocrisy does not change the facts.

Instead of fighting over fallacies, conservatives should establish common ground based on our principles. America’s enemies are on the march because generations of elites, Republicans and Democrats, pursued superficial strategies. They mistook symbolism and rhetoric for meaningful resistance to America’s foes. They tweeted platitudes as China consumed Hong Kong. They sent condolences as the Taliban rolled up Afghanistan. In Ukraine, Putin has taken the next, obvious step against the United States. Conservatives should lead the countercharge by asserting that might does not make right, that America’s friends have the right to protect themselves, and that the United States should help those who are willing to fight—and die—for their liberty.

We should start with Ukraine. Let’s make Lend-Lease great again and stop financing Putin’s war against Ukraine by buying oil and gas from Russia. Even better, the United States must extend sanctions to the Kremlin’s energy banks which Washington has not done yet. Finally, the United States can hit the Russian government where it hurts by sanctioning its ability to ship energy overseas on oil and liquified natural gas tankers. The United States successfully used this powerful financial tool against Iran, and it must deploy it now against Russia.

Unfortunately, these acts will only put out the current fires. Going forward, conservatives can and must prioritize actions over rhetoric and realign our foreign policy to reflect our principles and purpose as a country. This will mean leading from the front, prioritizing America’s friends over foes like China, and saying “No!” to those who claim that might makes right. Doing so will preserve the permanent things and slow the return of the Old Chaos.

Peter Doran is the former CEO of the Center for European Policy Analysis (CEPA) and former candidate for governor of Virginia. Follow him on Twitter @peterbdoran.