Conspiracy Theories About the Sunken Kursk Submarine Resurface in Russia 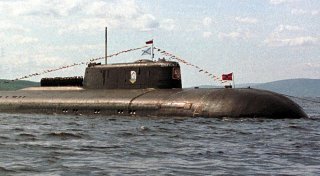 A retired Russian admiral has alleged that the Kursk submarine incident was caused by a collision with a NATO vessel, reviving a long-held but baseless claim about the worst submarine disaster in recent memory.

Retired admiral Vyacheslav Popov, who commanded the Russian Navy’s Northern Fleet when Kursk sank in the Barents Sea on August 12, 2000, told Russian state news outlet RIA Novosti that the Kursk collided with a North Atlantic Treaty Union (NATO) submarine. According to Popov, the NATO submarine was “apparently surveilling” the Kursk. Popov added that the collision possibly occurred when the NATO submarine somehow lost control and “got too close to the Kursk,” or as a result of unspecified maneuvers conducted by the Kursk’s crew.  The retired admiral acknowledged that he lacks concrete proof to back his claims: "I know the name of the [NATO] submarine with a probability of 90 percent, but in order to name it publicly, one needs to provide evidence, which I can not do," the admiral said. “[it was] a NATO submarine. It was in nearby waters and collided with the Kursk.” Popov did not clarify the fate of the alleged NATO submarine, nor did he offer any additional details on the purported collision.

K-141 Kursk was a Project 949A Antey (better known by its NATO reporting name Oscar II) nuclear-powered cruise missile submarine; delivered to the Northern Fleet in 1994, Kursk was one of the last Oscar II submarines to be commissioned. According to what has since become the Russian government’s official version of events, Kursk sank shortly after being cleared to fire several dummy torpedoes at the Kirov-class battlecruiser Petr Velikiy as part of large-scale Northern Fleet exercises in the Barents Sea. A hydrogen peroxide leak caused one of the submarine’s Type 65-76A torpedoes to explode, triggering a fire that quickly spread through the Kursk’s compartments and set off several more torpedo explosions. Government investigators have since identified faulty torpedo welding as the root cause of the initial explosion. The dummy torpedo in question had reportedly far exceeded its service life, posing a serious potential hazard. Subsequent reports uncovered numerous other safety violations aboard the Kursk, including missed inspection checks and a disabled rescue buoy—investigators further determined that the Barents Sea exercise itself was improperly conducted.

The incident resulted in 118 deaths, claiming Kursk’s entire onboard crew. The tragedy was compounded by a bungled government response, with Kremlin officials issuing conflicting or inaccurate statements regarding the investigation, refusing international help, and dragging their heels on announcing the extent of the casualties. Popov, who was transferred from his post shortly following the incident, was blamed in large part for the government’s slow response.

The Kursk disaster has become a fertile breeding ground for conspiracy theories challenging the official government narrative—observers have previously leveled baseless claims that nearby American attack submarines sank the Kursk with Mark 48 torpedoes, or that it was somehow sabotaged from within.

This is not the first time that Popov has spoken about a submarine collision in the Barents Sea, but his recent RIA interview includes new alleged details. He is one of several top Russian naval officials, along with former Fleet Admiral Vladimir Kuroyedov and late Admiral Mikhail Motsak, to argue that the Kursk collided with a foreign vessel.  Kremlin press secretary Dmitry Peskov refused to comment on Popov’s allegations, pointing reporters to the conclusions made by the original government report.