Why the Russian Navy Is Rethinking Battlecruisers 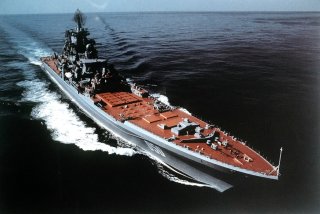 Here's What You Need to Remember: Petr Velikiy is currently active, while Nakhimov’s handoff has been delayed until at least 2023. Both ships are expected to serve well into the coming decades.

By the 1970s, the colossal battleships of WWI and WWII fame had fallen sharply out of favor with the world’s leading navies. These ships were increasingly seen as too expensive, and too vulnerable, to justify their steep procurement and maintenance costs. But even as western navies concluded that the age of the battleship had passed, the USSR saw an opportunity to build a large surface vessel of unprecedented scope. Leveraging the naval weapons and targeting innovations of the past decades, the Soviet shipbuilding industry set out to design a battlecruiser—that is, a lighter and faster variant of battleship—for the discrete purpose of destroying U.S. submarines. The Project 1144 Kirov class later grew into the more versatile mission purpose of holding the U.S. Navy’s carrier battle groups at risk, boasting a vast arsenal of torpedoes and anti-ship cruise missiles to threaten aircraft carriers and strategic submarines alike. Underlying these tactical goals was a broader strategic purpose: the Kirov battlecruisers were to operate in conjunction with a planned nuclear-powered aircraft carrier fleet to project Soviet power across the world.

The flagship Kirov vessel, Kirov (renamed in 1992 to Admiral Ushakov), was laid down in 1974 and inducted into the Northern Fleet in 1980. Armed with twenty P-700 Granit cruise missiles, ten 533 torpedo tubes, onboard S-300F, and 9K33 Osa surface-to-air missile (SAM) systems, several types of antisubmarine rockets, as well as over a dozen mounted guns and close-in weapons systems, the Project 1144 class was armed to the teeth in order to handle virtually any surface combatant scenario. These battlecruisers are the largest and heaviest surface active-service combatants in the world, exceeded only by some aircraft carriers. The class is capable of carrying three helicopters and could travel at a top speed of up to thirty-one knots. Three more Kirov ships, Frunze, Kalinin, and Yuri Andropov (later renamed to Admiral Lazarev, Admiral Nakhimov, and, Petr Velikiy respectively), were laid down through 1986.

These grand dreams of power projection and unbridled naval might dissipated with the Soviet collapse. The Orel and Ulyanovsk aircraft carrier projects never made it past the drawing board, while the Kirov vessels fell into disrepair over the course of the early to mid-1990s. The Navy eventually decided to retire one half of the Kirov fleet in order to save the other. Ushakov and Lazarev will be or are being, scrapped as of 2021. Nakhimov and Petr Velikiy were placed into a repair, refit, and modernization program to continue serving in Russia’s Northern Fleet. The two vessels will reportedly be upgraded with Russia’s upcoming 3M22 Tsirkon winged hypersonic cruise missile, as well as the new Kalibr cruise missiles and Otvet anti-submarine missiles.

Petr Velikiy is currently active, while Nakhimov’s handoff has been delayed until at least 2023. Both ships are expected to serve well into the coming decades.

Battlecruisers appear increasingly out of place amidst a rapidly modernizing Russian Navy, given the Kremlin’s relentless emphasis on smaller, leaner surface vessels and new submarines. Nevertheless, they have the firepower to hold NATO’s carrier strike groups (CSG’s) and other maritime assets at risk. No less importantly, Moscow is loath to part with these hulking cathedrals of steel as symbols of naval prestige and as testaments to the prowess of the late Soviet shipbuilding industry.

Mark Episkopos is a national security reporter for the National Interest. This article is being reprinted for reader interest.