Coronavirus Be Damned: Is Donald Trump Getting Ready to Open America for Business? 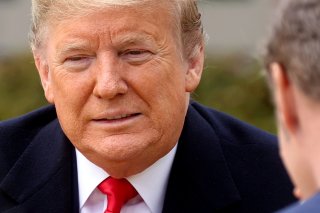 The first positive case of the coronavirus was reported in the United States on January 20, 2020. In two months, that has expanded along an exponential growth curve to nearly 50,000 people. The death toll stands at 615. In response, cities and states across the country have declared states of emergency, and enforced isolation protocol, closing businesses and asking people to remain in their homes.

President Donald Trump spent most of February dismissing the virus, comparing it to the seasonal flu and insisting that it was not a crisis. As the situation changed in March, so did his demeanor. On March 13, Trump declared a national state of emergency and has been using the powers of the federal government to provide aid to needy areas and compel companies to manufacture more medical equipment.

Now, however, Trump appears to be changing his mind, along with many others on the right. "Our country was not built to be shut down," Trump said on a Monday press conference. "We are going to be opening up our country for business because our country was meant to be open,” he said, adding that it would get “going again very soon.”

The original timespan for this kind of national shutdown was fifteen days. It was believed this would be enough time to isolate outbreaks and contain the virus. After becoming infected, individuals are highly contagious for fourteen days afterwards. But now, due to the size of the pandemic, medical experts are suggesting it could last for up to eighteen months.

The U.S. economy has already crashed, and the country is set to enter a period of economic turmoil not seen since the Great Depression. Businesses meant to close for only two weeks are now gone forever, and millions of Americans are expected to join the ranks of the unemployed next month.

More people, especially conservatives, are wondering whether the damage done to people’s lives through joblessness and bankruptcy won’t be worse than the virus itself. Some have proposed allowing people to return to work and attempt normal lives while the virus spreads. Opponents contend that this would overrun the healthcare system, lead to significantly more preventable deaths, and likely cause an economic depression anyway.

At the press conference, Trump was dismissive of the advice provided by healthcare professionals, saying “if it were up to the doctors, they may say let's keep it shut down—let’s shut down the entire world."

Some experts, worried about the costs of both not containing the virus and not allowing people to work, have tried to feel out a possible middle ground. But middle grounds are difficult for governments to implement, and as it stands, no one in or outside public office understands the full scope and impact of this crisis.