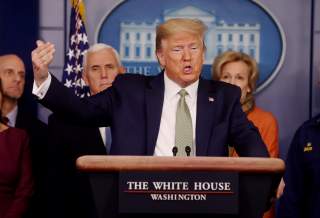 For the past two months, President Donald Trump has been saddled with one of the worst public health crises in American history. The coronavirus pandemic has infected over five thousand Americans nationwide, and caused roughly a hundred deaths. His administration’s response, which was initially criticized as slow to action and underplaying the seriousness of the threat, might be receiving a new breath on life.

This morning President Trump gave a press conference, a semi-daily affair these days, flanked by Vice President Mike Pence, Secretary of the Treasury Steve Mnuchin, and other administration officials. Trump laid out a timeline of fifteen days, with a goal of March 31 as the date by which the federal government hopes to have a gap on the exponential growth of the virus.

“We’re asking everyone to work from home if possible, postpone unnecessary travel, and limit social gatherings to no more than ten people,” Trump explained. “By making shared sacrifices and temporary changes, we can protect the health of our people and we can protect our economy.”

“I think our economy will come back very rapidly,” Trump mused, following a stock market crash of 12.9% yesterday. “[I]f we do this right, our country, and the world frankly, but our country can be rolling again pretty quickly.”

The President also attempted to smooth things over with New York Governor Andrew Cuomo, whose leadership style he’s been in conflict with. “I can say that with respect to Governor Cuomo, we had a great talk this morning. We’re both doing a really good job. And we’re coordinating it,” Trump said. “And we agree; different states need different things, and we agree on that one hundred percent. We had a very good talk, and I think we’re right down the same track.”

Following the press conference, the president was complimented by primetime CNN political correspondent Dana Bash. “If you look at the big picture, this was remarkable from the president of the United States. This is a nonpartisan, this is an important thing to note, and to applaud from an American standpoint, from a human standpoint,” Bash gushed. “He is being the kind of leader that people need—at least in tone—today and yesterday, that people need and want and yearn for in times of crisis and uncertainty.”

“[I]t is so important to hear him strike that tone of calm and of understanding of how incredibly dire this is,” Bash continued. “That’s pretty incredible from a guy who a couple of days ago was downplaying this to keep the economy going.”

“A very definite shift from the president, we’ll see if it continues,” intoned host John King to end the segment.

The primary question will be whether Donald Trump’s shift in response tone has come soon enough to contain the coronavirus.