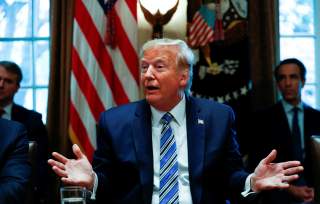 Last evening President Donald Trump gave a national address in an effort to comfort American anxieties about the coronavirus and announce new policies towards containing its spread. While the goal of the administration for the past month has been to fend off panic and maintain confidence in stock trading, Trump’s actions were widely interpreted as inadequate and investors responded accordingly.

When the market opened this morning, the S&P 500 immediately plunged 7%, triggering an automatic mechanical halt on trading. The same preventive action occurred Monday morning when mass-selling occurred. When trading reopened, stocks continued to decline, hitting a bottom of 7.2%. The Dow Jones Industrial Average fell even more, at 8%.

The only new proposal brought forward during the address was a moratorium on travel between the United States and Europe, where countries like Germany, Ireland, and Italy are suffering outbreaks. “To keep new cases from entering our shores, we will be suspending all travel from Europe to the United States for the next thirty days,” Trump said. “These prohibitions will not only apply to the tremendous amount of trade and cargo, but various other things as we get approval. Anything coming from Europe to the United States are what we are discussing.”

The idea that trade of physical goods would be prohibited was never considered on the table, and engendered immediate panic. Embarrassingly, the administration had to clarify after the speech that a mistake was made, and this would not be U.S. policy. Trump tweeted that it’s “very important for all countries & businesses to know that trade will in no way be affected by the 30-day restriction on travel from Europe. The restriction stops people not goods.”

The new travel ban will begin implementation this Friday at midnight, although even this has exemptions. Trump clarified during the address that American citizens who have gone through appropriate screenings will be allowed to travel after Friday. And the United Kingdom, newly independent from the European Union, is not included in the “Europe” ban. Not including the U.K. appears to be a political decision, not one based on health requirements; the country currently has over 560 active cases of coronavirus and has suffered ten deaths.

Furthermore, Politico has intimated that the choice of countries may also contain a personal agenda; both the United Kingdom and Ireland (which is also exempted) contain Trump-brand resorts.

The announcement of the travel ban, while it failed to prevent slides in American markets, actively encouraged them in Europe’s. The continent is facing its worst single-day drop in over thirty years, surpassing the 2007 financial crisis. Stocks in London were down 8%, in Germany 9%, and in Paris 10%.

Image Credit: U.S. President Donald Trump delivers remarks to the news media during a meeting with bankers on COVID-19 coronavirus response, inside the Cabinet Room at the White House in Washington, U.S., March 11, 2020. REUTERS/Tom Brenner/File Photo.