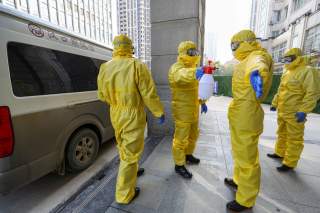 On January 28, a woman from Wuhan was waiting for her flight from Japan back to China when she became aware of an escalating conflict between the passengers hailing from Shanghai and those hailing from Wuhan and Hubei province. A Shanghai passenger, having overheard someone speaking in Wuhan dialect, became concerned about the potential spread of coronavirus. Another Shanghai passenger claimed to have seen one of the Wuhan passengers taking anti-fever medications. The standoff received widespread attention around China. Even Wuhan people outside of Wuhan are not immune to the consequences of the epidemic that started in their city and has now infected more than twenty thousand people and killed more than four hundred.

Eventually, China Southern Airlines flight CZ380, landed seven hours later in Shanghai, after the Shanghai municipal government had stepped in to help resolve the situation. The 16 Wuhan residents were stuck together in the back of the plane and greeted by health professionals to be put into isolation for fourteen days.

The Weibo post by Wuhan passenger ‘Pomello’ about the incident, in which she accused the angry Shanghai passengers of not acting like compatriots, went viral, generating 2.1 million likes and 107,000 comments.

While residents of Wuhan have been blocked from leaving the city ever since it was quarantined on January 23, the approximately five million Wuhan locals who were stuck outside of Wuhan when the quarantine was implemented face their own unique challenges. They have been turned away from hotels, shunned by peers, and put into lockdown by local governments.

Many of the measures to contain the virus that hit Wuhan people hard, moreover, are necessary, given the severity of the problem. In the controversy over flight CZ380, many Chinese sided with the Shanghai passengers.  A poll posted to Weibo of 1,038,000 web users showed 83.3 percent said the reactions of those who did not want to board was “understandable,” and just 8 percent decried the actions as “not understandable.”

Right or wrong—and sometimes it is difficult to judge in a quickly-developing situation when health and safety are on the line—it is undeniable that Wuhan people, both inside and outside the city, are having a tough time. And at least some of the reactions have been unjustifiable discrimination.

For example, after the news about the flight went viral, quite a few angry netizens attacked the Wuhan folks for “running around” outside of their hometown. ‘Pomello’ quoted one such critic and responded, “We are also victims. When we left, the city wasn’t quarantined. We didn’t flee. We were ordinary travelers. Who could have predicted it would have become this circumstance?”

Indeed, it is a misnomer to say that five million Wuhan people “fled” the city. The epidemic began spreading like crazy over Spring Festival travel rush, a period before the holiday during which hundreds of millions of Chinese return to their ancestral hometowns to celebrate the lunar new year or take the time off with international travel. The quarantine was not imposed until long after travel plans had been made. An analysis by The Paper (Pengpai News) found that the five million figure, which was asserted by Wuhan’s mayor, was approximately equal to the number of people who had left Wuhan over the same time frame during 2017’s Spring Festival travel rush. At most, only about three hundred thousand people—a drop in the bucket in Chinese terms—left Wuhan in the ten hours between when the quarantine was announced, and when it was implemented, The Paper found.

Many of those Wuhan travelers were caught off guard when the city was quarantined and left with few options, neither able to stay put nor return home. For a few days after the quarantine, air and rail travel into Wuhan was also suspended. Stories of Wuhan people having their hotels kick them onto the streets came out. One story of a Wuhan woman who couldn’t find a hotel room went viral, but it was later removed.

Many local governments ended up designating lodging, mostly cheap motels, for stranded Wuhan travelers, some of whom were required to stay for fourteen days—in most cases, the expenses paid for by the governments—before they can be released. After two flights from Thailand landed in Nanjing with a few dozen travelers who had previously passed through Wuhan landed in Nanjing, all passengers had to be tested, and many were put in quarantine. After the CZ380 flight controversy went viral, the Chinese embassy in Japan arranged for charter flights to take over one hundred Wuhan people still in Japan back to Wuhan.

One Wuhan man’s story, which was published by a finance website and shared on leading news aggregator Sina, remains online. It recounts how he and his parents had to take a train to a city thirty miles away to find a hotel that would accept them.

They had long before planned a trip to Macau for January 20–24. On January 23, the quarantine was imposed (after having been announced the day before), and their flight back to Wuhan was abruptly canceled. One hotel rejected them outright. The next said they would need to get checked first by a hospital. The hospital said it could only confirm they had no fever but not that they had not been infected by the novel strain of coronavirus, which can take two weeks to show symptoms.

His father recommended they go to Zhongshan, a city to the north almost halfway between Zhuhai and Guangzhou, where he had a friend. While the friend’s home proved too small for three people, they did find a hotel—but they could only stay two nights. After the first day, they were told to leave; they remained for one more night despite power and water to their room being shut off. The next day, they decided to return to Wuhan, but they could not buy a ticket.

Finally, only after being taken in by the police, who filed two reports, were they able to be on their way. After the first report, another police officer stopped them on their way out and told them they had to be taken to the authorities at the next level up and have a report filed with them. They were offered to be taken to a government-designated hotel, where they would be allowed to stay for 138 yuan per night (less than US$20, a low price in China). They declined and opted to buy train tickets back to Wuhan instead.

The ticket office would not sell tickets directly to Wuhan. To get to Wuhan, they were told, they would need to buy tickets to Xinyang, a city north of Hubei, on the southern border of Henan province.

Before boarding the train, the author wrote, he warned his parents not to speak too much, as their thick local dialects would reveal them to be Wuhanites. Finally, the train did in fact stop at Wuhan station, sparing the three another tiring leg of their saga.

The author concluded by writing, “As far as I know, there were many whose journeys home were more torturous than mine.”

Currently based in China, Mitchell Blatt is a former editorial assistant at the National Interest, Chinese-English translator, and lead author of Panda Guides Hong Kong. He has been published in The Korea Times, Silkwinds magazine, and Areo Magazine, among other outlets. Follow him on Facebook at @MitchBlattWriter.