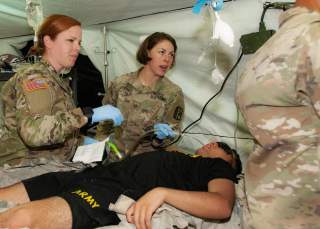 U.S. Military Sealift Command has activated both of its gargantuan hospital ships and is deploying one each to New York City and Seattle starting in late March 2020 in order to help relieve pressure on civilian hospitals in both cities that are struggling to handle thousands of coronavirus patients.

The activations of the hospital ships Comfort and Mercy are perhaps the most visible of the military’s contributions to the United States’s effort to slow the spread of the dangerous, flu-like disease.

More dramatic military efforts are likely to begin soon, and could involve a mass mobilization of Army field hospitals, units that the ground-combat branch organized in order to handle combat casualties during a major shooting war, but which could function as back-up hospitals much like the hospital ships can do.

What the field hospitals probably can’t do, however, is directly treat coronavirus patients, most of whom would require isolation that the tent-based field hospitals aren’t equipped for.

“Whether it's our field hospitals, whether it's our hospital ships, they are focused on trauma." U.S. Defense Secretary Mark Esper told reporters. "They don't have necessarily the space, the segregated spaces you need to deal with infectious diseases."

In response to the coronavirus, states across the USA by mid-March 2020 have activated thousands of National Guardsmen. Some are helping to staff testing centers. Others could help crew the hospital ships.

Still, none of the National Guard’s 14 field hospitals have activated, nor has the active Army deployed any of its eight U.S.-based field hospitals. There’s a good reason for that. The doctors and nurses the field hospitals would require often also work in bricks-and-mortar hospitals, either in their capacity as active-duty military personnel or, in the case of Guardsmen, in their civilian careers.

Activating field hospitals could draw human resources away from hospitals that already are understaffed as coronavirus cases spike. Esper warned against “robbing Peter to pay Paul” when a reporter asked him about deploying field hospitals.

There’s a compromise, however, that could see the military and civilians working together to set up ad-hoc field hospitals that don’t take resources away from existing facilities. The military or the semi-civilian Army Corps of Engineers could build field hospitals. A new organization of civilian volunteers drawing from the ranks of retired medical personnel could staff them.

At the same time, Cuomo called for retired doctors and nurses to volunteer for a new reserve medical force. At the local level in New York City, a thousand retired and private-practicing doctors and nurses volunteered in a single day to join the city’s own reserve medical corps, indicating that a wider mobilization of retired health-care workers is both possible … and necessary.