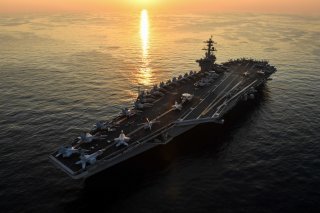 The first sailor from the U.S.S. Theodore Roosevelt has died on Monday, two weeks after the aircraft carrier’s former skipper warned that “there will be losses” as the novel coronavirus onboard the ship.

The fate of Theodore Roosevelt became a national political issue after a dire warning from Capt. Brett Crozier was leaked to the media, leading to Crozier’s firing, public outrage, and the subsequent resignation of acting Navy Secretary Thomas Modly. Crozier’s nightmare prediction now seems to be coming true.

A sailor from the Theodore Roosevelt passed away from coronavirus-related complications in the intensive care unit of U.S. Naval Hospital Guam, the U.S. Pacific Fleet announced on Monday, four days after the sailor was found unresponsive in an isolation house.

The sailor had been removed from the ship on March 30 after testing positive for the virus. The Navy has not released the sailor’s name, as the next-of-kin have not yet been notified.

The aircraft carrier has been in Guam since March 27, a little over two weeks after the ship left a port call in Da Nang, Vietnam. Dozens of sailors had spent the last night of the Da Nang visit at a hotel where two other guests tested positive for the coronavirus.

The virus has a two-week incubation period.

Crozier asked to evacuate the ship down to a skeleton crew, but Navy superiors proposed less drastic isolation measures and attempted to keep the ship in operation. Modly and residents of Guam reportedly worried that the island territory could not accommodate thousands of evacuees from the ship.

The skipper then sent an email to several Pentagon officials that was leaked to the San Francisco Chronicle.

“[I]n combat we are willing to take certain risks that are not acceptable in peacetime,” he wrote. “However, we are not at war, and therefore cannot allow a single Sailor to perish as a result of this pandemic unnecessarily.”

“With the exception of a handful of senior office staterooms, none of the berthing onboard a warship is appropriate for quarantine or isolation,” Crozier warned. “The spread of the disease is ongoing and accelerating.”

Modly removed Crozier from his position as skipper, citing the captain’s lapse of judgement in circumventing the chain of command. Sailors cheered their former skipper as he left the ship, prompting Modly to visit the ship himself and address the crew on April 6.

The profanity-laced speech, which called Crozier “too naive, or too stupid to be a commanding officer of a ship like this” if he had not intentionally leaked the letter, was itself leaked to the media. Modly initially stood by his words, but resigned as Secretary of the Navy the next day.

Crozier himself has since been diagnosed with the coronavirus.

Chief of carrier operations Adm. Michael Gidlay recently told the Associated Press that he would not rule out reinstating Crozier’s command.