Coronavirus Might Stop You from Attending Church This Easter 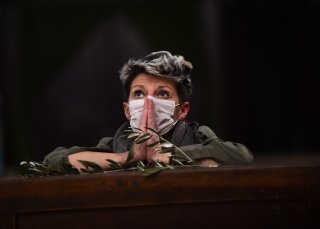 As the United States continues its coronavirus-necessitated lockdown into April, dissatisfaction is reaching a tipping point among many Americans who seek to go about their regular lives. While restaurants, bars, and most stores remain closed, it’s spiritual services that some Americans are yearning for the most. This has placed public health and the freedom of religion on a collision course.

Under social distancing guidelines, the federal government has recommended, and state and local governments are enforcing, rules to limit social gatherings to no more than ten people. This is to prevent the coronavirus from spreading and an attempt to flatten the expansionary curve of the infection.

For church congregations that meet every Sunday, these government demands have been stifling. Normally, any government interference in their religious practices would be highly illegal and a violation of First Amendment rights. But under the pretense of a national public health emergency, government officials are taking never-before-possible steps to limit or close church services which they view as enabling the spread of disease. For instance, in Washington D.C. one of the first coronavirus outbreaks was a result of an infected priest giving communion to his worshippers.

Some states and localities have threatened arrest and heavy fines for people participating in mass gatherings and have used the police to break up such events.

The most headline-grabbing incident occurred in Florida last week where Pastor Rodney Howard-Browne was arrested after holding a church service that involved hundreds of participants. Since his release, local law enforcement has declined to continue prosecution of the case and will not be making further arrests in the future. While Pastor Howard-Browne’s actions violated local ordinance banning such gatherings, a new executive order from Florida Governor Ron DeSantis has declared church services “essential business,” allowing them to continue despite the quarantine. Still, the pastor has announced that his church will be shifting to online services for the time being.

Some governors, like Greg Abbott of Texas, are taking the same line, declaring that religious services of any size are exempt. But some, like Governor Brian Kemp of Georgia, are placing guardrails around the practice. After consulting with local clergy, Kemp has said that religious gatherings larger than ten people must maintain the recommended six-foot social distance between individuals.

On the national level, President Donald Trump and Vice President Mike Pence are maintaining that limiting gatherings of all types, both secular and religious, are what is required to keep people healthy. Pence has said that church groups not should be larger than ten, and while President Trump expressed that “my biggest disappointment is that churches can’t meet in a time of need,” he has not backed away from the restrictions.

This comes just days before the Easter holiday, the most important holiday in the Christian calendar where worshippers celebrate the passion of the Christ.