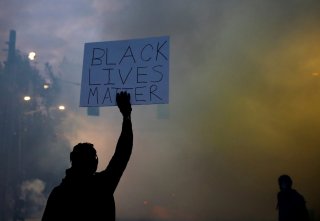 Amidst the bullish markets of the 1980s, the corporate governance model drove singularly toward profits, without regard for partisanship or pet political causes. While this gave rise to larger-than-life cinematic anti-heroes like Gordon Gekko (Wall Street) and Jordon Belfort (The Wolf of Wall Street), it also cemented America’s standing as both a global trade leader and the world’s largest national economy.

These days, however, big business is no longer focused on its business. Instead, in the wake of last year’s racial unrest, corporate powerhouses seem more concerned with providing public mea culpas on their historic failure to be sufficiently “woke.”

Self-inflicted floggings appear regularly within professional sports, where the Cleveland Indians have dropped their “Chief Wahoo” logo and have promised to follow in the footsteps of “The Washington Football Club” in dropping their longstanding team moniker as well.

Not to be outdone, the NFL committed $250 million over ten years to combat systemic racism and “other racial injustices.” And NFL Chairman Roger Goodell apologized to Black Lives Matter, stating “we were wrong for not listening to NFL players earlier” when it came to protests during the national anthem. (Goodell’s groveling was not enough to satisfy the far left Twitter mob, which howled that the league’s “Inspire Change” Super Bowl ad didn’t go far enough to right past wrongs.)

Corporate America, too, has been afflicted by a sudden seizure of social penitence, and the new governance model seems to be “activism over profits.” There’s nothing like the pressure of the weakening American dollar and the rapidly increasing influence of activist groups to force a company to make the switch from shareholder to stakeholder modeling, leaving small investors last in line behind society, consumers, and employees—those with the loudest mouths and the biggest muscle. Changes in corporate leadership standards are part of this new paradigm and increased diversity measures from companies like Coca-Cola and the world’s second-largest stock exchange, Nasdaq, are notable case studies.

The problem? They’re legally suspect. The increasing use of race and gender preferences in hiring, promotion, and work assignment decisions—particularly when such preferences look like unconstitutional quotas—skate the legal line under Title VII of the 1964 Civil Rights Act.

Yes, the Supreme Court has recognized that, in some instances, affirmative action plans are permissible in an employment setting. But in the case most often cited for this supposition, United Steel Workers v. Weber (1979), (1) the steel industry was “traditionally segregated” (contra the legal field) and (2) the affirmative action plan at issue was “a temporary measure” and “not intended to maintain racial balance, but simply to eliminate a manifest racial imbalance” in an exclusionary field of work.

What of diversity efforts? Are they a sufficient justification for “segregating or classifying employees” according to race? The racial “diversity” rationale recognized by the Supreme Court as a compelling interest in academic settings and sufficient to withstand the scrutiny of Title VI (which prohibits discrimination on the basis of race, color, or national origin within any federally assisted program), has not been similarly recognized in corporate settings. It’s untrodden legal ground.

At the end of January, Coca-Cola’s new general counsel, Bradley Gayton, publicly announced a new set of diversity guidelines for Coke’s outside counsel. In a sanctimonious missive beginning with “I write you with a heavy heart,” Gayton decreed that, henceforth, all outside counsel will commit “at least 30% of each billed associate and partner time [from] diverse attorneys, and of such amounts at least half will be from Black attorneys,” for all new matters.  It’s a directive with clout: failure to meet the diversity guidelines over two quarters will elicit a “non-refundable 30% reduction in the fees payable for such New Matter going forward until the commitment is met.”

Ed Whelan recently worked these guidelines out to their (il)logical conclusion at the National Review, illustrating how minimum quotas for time billed by black attorneys (and for black partners, specifically) develop an artificial incentive to disproportionately bill hours for said attorneys. The result is a siloed approach to both hiring and workforce development, in which highly talented black lawyers may be relegated to only a few of the law firm’s matters—and more specifically, to the matters that come with penalties for a failure to do so. Despite all the unctuous pleading for diversity, with measures like these, the result looks an awful lot like discrimination.

An approach perhaps even more dubious than Coke’s is Nasdaq’s proposed board diversity rule—one characterized by my Heritage colleague David Burton as “immoral [with] no basis in economics.” Nasdaq is plain about the rule’s incentives, though, and invokes both the imperatives of the “social justice movement” and the “benefits to stakeholders of increased diversity.”

Nasdaq is proposing to require each of its listed companies, subject to certain exceptions, to: (i) Provide statistical information regarding diversity among the members of the company’s board of directors under proposed Rule 5606; and (ii) have, or explain why it does not have, at least two ‘‘Diverse’’ directors on its board under proposed rule 5605(f)(2). ‘‘Diverse’’ means a director who self identifies as: (i) Female, (ii) an Underrepresented Minority, or (iii) LGBTQ+. Each listed company must have, or explain why it does not have, at least one Female director and at least one director who is either an Underrepresented Minority or LGBTQ+. Foreign Issuers (including Foreign Private Issuers) and Smaller Reporting Companies, by contrast, have more flexibility and may satisfy the requirement by having two Female directors [emphasis added].

The Nasdaq exchange lists more than 3,300 companies. Nasdaq imposes and enforces detailed rules on all of these companies, but these rules must be approved by the SEC. Should a rule of this magnitude be approved by the SEC and enforced by Nasdaq for all its member companies, it would re-make a substantial part of American enterprise by effectuating a left-wing political agenda that is wholly unrelated to consumer-geared production or shareholder returns.

Coke and Nasdaq aren’t outliers in their all-guns approach to diversity and inclusion. A September 2020 survey of over two hundred companies undertaken by Deloitte and the Society for Corporate Governance revealed that ‘‘most companies and/or their boards have taken, or intend to take, actions in response to recent events surrounding racial inequality and inequity; 71% of public companies and 65% of private companies answered this question affirmatively.’’

For considerations of race or sex within the context of Title VII of the Civil Rights Act of 1964, the law remains the same as it was in 1984 (accounting, of course, for the newly-expanded definition of “sex discrimination” from 2020’s Boston v. Clayton County case), when Supreme Court Justice Lewis Powell declared in a concurring opinion in Hishon v. King & Spalding: “In admission decisions . . . it is now widely recognized—as it should be—that in fact neither race nor sex is relevant. The qualities of mind, capacity to reason logically, ability to work under pressure, leadership, and the like are unrelated to race or sex.” Writing for the majority in 2009’s Ricci v. DeStefano, Justice Anthony Kennedy added, “The purpose of Title VII is to promote hiring on the basis of job qualifications” with the goal of creating a workplace environment free of discrimination, “where race [or sex] is not a barrier to opportunity.”

With all the corporate politicking and my-way-or-the-highway “diversity” initiatives, it’s no wonder that Gallup’s latest annual Mood of the Nation poll found growing dissatisfaction with the size and influence of major corporations. Indeed, the public satisfaction rate for mega-corps has tumbled from 41 percent to 26 percent in just one year.

Still there is no sign that self-flagellating corporate wokeness will wane anytime soon. While companies like Amazon made massive donations in the wake of the George Floyd riots to Black Lives Matter and other social justice organizations, they have also suddenly and without explanation banned highly successful books with a right-of-center orientation while at the same time benefitting from Chinese contracts with organizations like Dahua, the security camera company that alerts police when its facial recognition software identifies members of the persecuted Uighur ethnic group. Perhaps Big Business ought to spend some time cleaning the house before concerning itself with how many women or minorities are on its boards of directors.

Where might America’s next admission of racist guilt come from? Let me posit a guess.

How to Realize Diversity in the National Security Community