This Could Be the Air Force's Future: What You Need To Know About 'Wingman Drones' 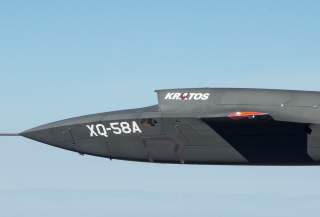 The unmanned aircraft "have the potential for dramatically changing the game in the conduct of air operations," David Deptula, a former Air Force general who is now the dean of the Mitchell Institute for Aerospace Studies in Virginia, told Air Force magazine’s Rachel Cohen.

"They can bring ... more force inventory at a fraction of the cost of inhabited aircraft, while facilitating the employment of dramatically increased weapons employment capability over a much shorter timeline than required with conventional aircraft," Deptula said.

The Air Force Research Laboratory in Ohio is overseeing three related programs that, in a few years, could result in a combat-ready robotic wingman.

The Skyborg program is developing the concepts, software and control systems that could allow a human operator -- either a pilot flying in a conventional warplane or a controller on the ground -- to interface with a group of drones. AFRL hopes to complete Skyborg by 2023.

The XQ-58 dovetails with AFRL's Low Cost Attritable Aircraft Technology program, which aims to develop technology and processes for quickly producing large numbers of small, fighter-style drones at a cost of no more than $3 million per drone.

By comparison, a new F-35 manned fighter costs around $100 million.

While AFRL has not explicitly linked Skyborg, the XQ-58 and LCAAT, it's telling that all the concept art the laboratory has released for the Skyborg and LCAAT efforts includes drones that bear a striking resemblance to the XQ-58.

Australia, China and Japan also are working on wingman drones. In February 2019, Boeing's Australian subsidiary unveiled the so-called "Airpower Teaming System." The most striking part of the new system is a 38-foot-long, jet-powered drone that Boeing said could carry weapons and sensors and fly as far as 2,000 miles in formation with manned planes.

A mock-up or prototype of China's 30-feet-long Dark Sword drone first appeared in public in an undated photo that circulated on-line in mid-2018. Japan revealed its own "Combat Support Unmanned Aircraft" wingman drone concept in a technology roadmap that Aviation Week first published in late 2016.

"The idea of a robot wingman is that it can keep pace with manned planes, but be tasked out for parts of the mission that you wouldn't send a human teammate to do," Peter W. Singer, author of Wired for War, told The Daily Beast.

"We’re likely to move over time towards a world where you see the human-inhabited aircraft play a sort of quarterback role where they’re managing the fight, but out at the edge, you actually have a diverse mix of uninhabited aircraft of various shapes and sizes," Paul Scharre, an air-power expert with the Washington, D.C. Center for a New American Security, told Air Force.

Which is not to say these manned-unmanned teams are appropriate for all missions, Deptula pointed out. "The spectrum of air operations spans from disaster assistance/humanitarian relief to global thermonuclear war—there are many missions across that spectrum of operations that will require manned aircraft without ‘uninhabited loyal wingman’ flying with them."

"That said, there will be a large portion of combat air operations" that will need drones, Deptula added, according to Cohen at Air Force.

"It will probably take a generation, but the balance of human-inhabited and uninhabited aircraft in the Air Force should shift over time," Scharre said. He told Cohen there could be 20 unmanned aircraft for every manned aircraft.