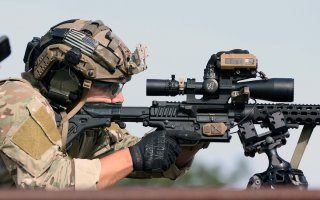 The Army is trying to fast-track its Next-Generation Squad Weapons so that it can replace its aging M4 Carbine and M249 Squad Automatic Weapon.

LoneStar has partnered with famous gunmaker Beretta to architect a gas and recoil-operated, magazine-fed automatic rifle. The weapon is impulse averaged and air-cooled to optimize lethality and combat performance. LoneStar’s gun is designed for short-recoil and automatic fire.

Other attributes of the LoneStar weapon include dual-firing modes with a closed bolt in semi-automatic mode. Beretta statements also refer to a flash-minimizing, sound-reducing suppressor design intended to reduce an enemy’s ability to pinpoint the location of the weapon and soldier on the battlefield.

True Velocity’s advanced composite-cased 6.8TVCM ammunition solution complements the LoneStar weapon by providing extremely consistent muzzle velocity, improved accuracy and extended effective range in a cartridge that is approximately 30 percent lighter than a brass-cased 7.62x51-millimeter cartridge. The polymer-based material employed in the design of the True Velocity case also insulates the weapon from heat transfer, reducing wear and tear on the rifle.

“The composite case insulates the chamber and bolt face from heat transfer, reducing wear and tear on the weapon system and the consistency of our powder burn results in tighter standard deviations in muzzle velocity, high velocities, and dramatically reduced muzzle flash,” according to True Velocity President Chris Tedford.

Some of the LoneStar-TrueVelocity-Beretta team’s innovations are intended to build upon previous Army efforts to improve the M4, including managing heat signature challenges with infrared suppressors, acoustic sensors, and muzzle-flash reducing technologies.

The Next-Generation Squad Weapons and their accompanying ammunition system explore areas such as infrared signature reduction, ergonomic improvements, and recoil, but it also aims to take the program in a new direction. While much of the Army’s prior M4 upgrade work and developmental progress likely contributed to the innovations incorporated in the Next-Generation Squad Weapons, the new rifle is built to expand, re-adjust, and greatly advance close-in-combat lethality.

Army weapons developers have been careful to reference each individual vendor in public statements. Along with comments about Textron and Sig Sauer, Maj. Wyatt Ottmar, the project manager of the Soldier Lethality Cross-Functional Team for Army Futures Command, noted the LoneStar offering “incorporates a bullpup design that places the magazine behind the cartridge and the pistol grip, which allows for a longer barrel while minimizing the total length of the weapon,” according to an Army-produced video.

The Next-Generation Squad Weapons and rounds are slated to be deployed by the end of 2022, going first to soldiers within the close combat force, including elements of the Active National Guard and Reserve.