Could a Huge Taiwanese Drone Force Stop a Chinese Invasion? 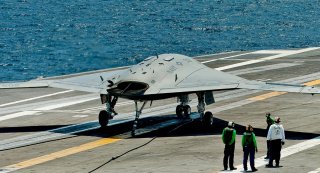 A recent RAND Corporation study delved into the threat China poses to Taiwan and modeled what an invasion of the small island democracy would look like—and what it would take for Taiwan to defeat an invasion force.

During a discussion on the modeling, David Ochmanek, senior international/defense researcher at the RAND Corporation and former deputy assistant secretary of defense for force development, explained that the United States and Taiwan would have a very small window of time to defeat an invasion force.

“U.S. and allied forces may have as few as a week to 10 days to either defeat this invasion or accept the fait accompli,” Ochmanek explained. “And the Chinese understand that if they’re to succeed in this, they either have to deter the United States from intervening or radically suppress our combat operations in the theater."

A hypothetical fight against Taiwan would require a commander to not only gain air superiority—a facet of war that American forces have often enjoyed following the collapse of the Soviet Union—but also to “actually reach into this contested battlespace … and find the enemy and engage the enemy’s operational center of gravity – those hundreds of ships carrying the amphibious forces across Strait, the airborne air assault aircraft carrying light infantry across the Strait."

Ochmanek contrasted how the United States has increasingly relied on very sophisticated platforms, warfighting tools that are expensive and unexpendable. If the United States were to defend the Taiwan Strait, however, it would be advantageous to pump inexpensive platforms into the battlespace that “can do the jobs that human beings have in the past done and done them actually more robustly than manned concepts.”

Given the relatively short distance between mainland China from Taiwan, unmanned vehicles could be relatively small and inexpensive. A simple design—just a few sensors plus a communications package—would help facilitate the purchase of hundreds if not thousands of drones.

Dispersion of forces away from large airbases are another key part of the Taiwan defense puzzle. Relatively small, unmanned aircraft, especially runway-independent aircraft, could be decentralized and hidden virtually anywhere. Kratos' XQ-58A Valkyrie unmanned aircraft—a relatively small drone that can be stowed and launched from a shipping container—offers an interesting template.

Defending Taiwan will not be easy. Wargames conducted inside and outside the Department of Defense predicted that though the United States and Taiwan could fend off a Chinese invasion without incorporating a massed, disposable drone strategy, the costs in men and materiel would be incredibly high. However, a deadly disposable drone strategy could help equalize the odds.