Could Russia's 152-Millimeter Cannon Be Added to the Armata Tank? 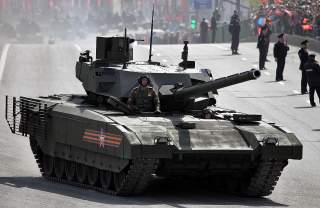 The 152-millimeter cannon has a rich history in the Russian Army. In World War II, 152 millimeter cannons armed the ISU-152s and SU-152s assault guns, which were renowned as some of the only Soviet armored vehicles that could knock out the German “big cats.” The guns also fired a devastating high explosive shell that could destroy all but the heaviest of bunkers and decimate infantry.

Despite their success during World War II, during the Cold War 152 millimeter guns vanished from the direct fire role. It was relegated to artillery units, which utilized 152 millimeter caliber guns in a variety of towed guns and the 2S3 and 2S19 self-propelled howitzers.

However, in the early 1980s, the concept of a 152 millimeter direct-fire gun was revived in response to possible advances in NATO armor technology. The Soviets began looking at larger guns than their then-standard 125 millimeter 2A46 for their tanks.

Predictably, one of the more successful projects was a return to the 152 millimeter caliber, as barrel and round technology were already developed for artillery guns in that caliber. But the new 152 millimeter direct fire gun designs incorporated the almost thirty years of development in military technology since the original World War II guns.

The new 152 millimeter gun was developed by the KB-3 office of the Kirov design bureau and given the designation LP-83. It was originally planned to be rifled, but development difficulties meant it was a smoothbore. The gun was designed to withstand chamber pressures of up to seven thousand kilograms per square centimeter.

It was decided to mate this gun with the T-80BV, one of the cutting-edge tanks of the Soviet Union at the time. The resulting tank was called Object 292.

The development process of putting the gun on the T-80 chassis was difficult. At first, it was thought that the turret ring for the T-80 was too small to mount such a large gun. However, an entirely new turret was designed that rectified this flaw.

The original cannons required two human loaders to stuff the massive shells into the cannon in a slow process. With the small turret and low profile philosophy employed on modern tanks, this was no longer a feasible solution. A new autoloader had to be devised to handle the large 152 millimeter shells, although design work was made easier by existing autoloader designs for 125 millimeter shells.

The Object 292 prototype (which only mounted the gun) was completed in late 1990, but all development work was halted by the fall of the Soviet Union. The prototype was found to display very favorable characteristics. Due to good design in the turret, the recoil stroke of the LP-83 gun was the same as the 2A46. The gun itself featured a 50 percent increase in energy at the muzzle over the 2A46.

While Object 292 saw no further development after the Cold War, becoming a museum piece in 2009, the 152 millimeter would live on in the Russian Federation’s Object 195 tank project. The project was designed based upon a set of revised requirements made by the “Improving-88” program, which examined the future of armored combat.

The key paradigm behind the program which was to develop a tank with such a level of firepower and protection that it would perform on a similar level to how the German Tiger I did in 1942 when it faced Soviet armor; it would overmatch and outrange the competitions so thoroughly it would be able to defeat enemy armor with one shot at long range.

The Object 195 had a multitude of advanced features, although some were added during the later period of development after the fall of the USSR. In many ways, it can be seen as the predecessor of the T-14 Armata as it featured an unmanned turret with autoloader and placed the crew in a protected capsule in the hull.

But the centerpiece was the armament, the massive 2A83 152 millimeter 55 caliber gun. It had a muzzle velocity of 1980 meter per second, close to what some consider is the theoretical limit of a conventional gun at 2000 meters per second. It was fitted with an autoloader that could reload it within six seconds.

In order to take advantage of this ballistic performance, the Object 195 was fitted with a radar gunsight. Due to their lower frequency on the electromagnetic spectrum, radar sights are totally unaffected by smoke and fog and don’t suffer from temperature changes like thermal sights.

In addition to the radar, advanced optical and thermal sights were mounted on the Object 195. There was even a datalink or sensor fusion capability. Combined, these systems would grant the Object 195 with effective ranges going out past 5 kilometers.

While armor-piercing shells were considered to be the primary ammunition, the tank was said to have a high degree of compatibility with 152 millimeter artillery ammunition. Russian sources have stated that the Object 195 would be able to shoot the Krasnopol laser guided shell, which would allow it to deliver precision high-explosive munitions at very long distances.

However, the scariest implication of the 152 millimeter caliber and compatibility with artillery ammunition is that theoretically, the Object 195 would have the ability to shoot the 3BV3 152 millimeter 1 kiloton tactical nuclear munition from its gun.

While some media outlets have refuted this notion, the capability to do it without harming the tank or crew is definitely there. Given the long range of its sighting apparatus and the ballistic performance of the 152 millimeter gun, the Object 195 would be able to remain outside of the blast radius of the tactical nuke by shooting it far past four kilometers. Even then, in most common damage models, the blast shockwave of a one kiloton nuke would only go out to about a one kilometer radius before dissipating.

That would leave only the fallout effects of a nuke to contend with. But like practically every vehicle designed during the Cold War, the Object 195 is fitted with an extensive NBC (Nuclear, Biological, and Chemical) protection system that would protect the crew from the fallout. The positioning of the crew in an armored capsule in the hull simplifies the task even further.

Development of the Object 195 ceased in 2010, and in 2015 the T-14 Armata was revealed as the next main battle tank of Russia, armed with a 125 millimeter gun. Some Russian military experts have lamented that the “revolutionary” Armata is a devolution of the Object 195.

There has been talk of upgrading the Armata to a 152 millimeter gun, and speculation about why it was not revealed with one. The Armata lacks a radar gunsight, which would it prevent it from reaching the full range potential given by the 152 millimeter.

Also, current NATO tanks have not seen major advances in protection, so the increase gun barrel life given by the 125 millimeter (900 versus 300 shots for the 152 millimeter) could be seen as an advantage for reduced training costs. Additionally, switching to 152 millimeter rounds would reduce the ammunition load of the Armata as 152 millimeter rounds are significantly bigger.

Image: Main battle tank T-14 object 148 Armata (in the streets of Moscow on the way to or from the Red Square). Military Blog