Could the U.S. Establish Air Supremacy In a Conflict With Russia? 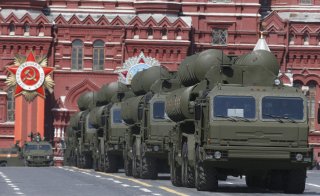 American operations, military exercises, and support for allies will not be limited whatsoever by the presence of Russian-made air defenses near Eastern Europe, senior U.S. officials said.

“We have continued to execute operations in international waters and airspace and that has not changed in the Baltics or the Black Sea. We are going to operate in both of those locations with the US Navy and their partner Navies,” U.S. Air Force Gen. Jeffrey Harrigian told the Mitchell Institute for Aerospace Studies in a recent video interview.

In a vague but notable comment, Harrigian asserted that the United States possesses a “variety of ways through which to render air defenses ineffective.”  Harrigian mentioned no specifics, yet he could have been referring to known stealth technology such as low-radar cross section configurations, radar-absorbent coating, electronic warfare jamming technologies, or simply speed and maneuverability. Even if an advanced Russian air defense system could discern that some kind of aircraft was nearby, there is almost no evidence that even the most advanced air defenses would be able to sustain a sufficiently narrow and continuous track to accurately target stealth aircraft.

Harrigian’s statements, which of course did not reveal any specifics regarding how Russian air defenses could be eluded, still seem quite significant given how much has been made of Russia’s air defenses. It is believed that upgraded Russian air defenses are linked together as “nodes” through digital networking and now operate with an improved ability to track and attack even some stealth aircraft.

Newer Russian air defenses are also able to hit more distant targets and strike air assets moving at high speeds. However, despite all of the hype surrounding Russian air defenses, the U.S. Air Force and its allies have made it clear that they will not be deterred from conducting operations in international airspace.

The United States’ ability to establish air supremacy in any conflict with Russia over Ukraine would be impacted by the effectiveness of Ukraine’s air defenses. However, regardless of the effectiveness of Ukraine’s air defenses, a sufficient presence of American and allied F-35s could quite likely overmatch Russian Su-57s and allow the United States to establish air supremacy. Despite the size and lethality of Russia’s tank and armored vehicle forces, securing Ukrainian territory could prove quite difficult for Russian forces operating without air supremacy.

These emerging tactical and strategic realities may be part of why Russia will likely think twice before invading Ukraine.