Could the U.S. Gain Superiority in the Skies Over Taiwan? 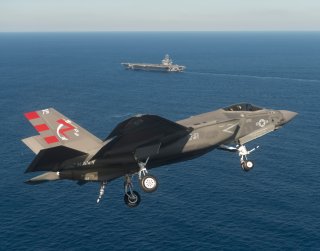 A quick look at force structures, basing, and geography in the Pacific suggests that U.S. and allied naval power would be crucial to stopping any Chinese assault on Taiwan. How would a hypothetical U.S. response to a Chinese attack play out?

Although much is made of the fact that China now operates a larger navy than the United States, there are several other key factors to consider.

The first and most obvious factors are timing and location. U.S. Indo-Pacific Command operates as many as five aircraft carriers and more than 1,100 sea-launched aircraft. How fast could they respond? Will they be in position in time? This would hinge upon forward operations, overhead surveillance from drones and satellites, and the Navy’s operating presence in the region.

There is likely a reason why the U.S. Pacific Fleet has on several occasions conducted dual-carrier operations in the Pacific theater, as an ability to project dominant air power from closer ranges at sea could be decisive. Should an initial incoming salvo of ballistic missiles be blunted or stopped by Taiwanese air defenses, air and sea-launched aircraft could hypothetically have time to stop a Chinese amphibious assault, provided aircraft carriers were close enough. Speed would be the deciding factor, given that Taiwan is only 100 miles from the Chinese coast. Chinese naval forces, however, would need to be staged, prepared, and assembled prior to any attack, something easily noticeable by U.S. and allied intelligence and reconnaissance. This might give U.S. and allied forces an opportunity to race counterattack forces into position.

The United States could also possibly achieve sea-launched air superiority above a Chinese amphibious approach, provided of course U.S. and allied carriers, ships, and aircraft were close enough to respond in time. China is now known to operate a number of fifth-generation J-20 stealth fighters, but they must launch from land and might be identified in time. China is also developing a fifth-generation J-31 carrier-launched aircraft variant, yet it may be a long way from being operational in impactful numbers. The United States and its allies are likely to have access to a much larger force of fifth-generation fighters, given that U.S. carriers and amphibious assault ships can operate with large numbers of F-35 stealth fighters. The USS America, for example, is an amphibious assault ship known for sailing missions with as many as thirteen F-35B fighters on board. This advantage is compounded by the fact that China does not appear to have a vertical take-off fifth-generation option, or even an ocean-launched fifth-generation fighter.

Therefore, the best hope for a timely response to a Chinese assault would likely come from the ocean, a factor that may have motivated the Pentagon’s “Pacific Pivot” and the decision to forward-position assets in the region.