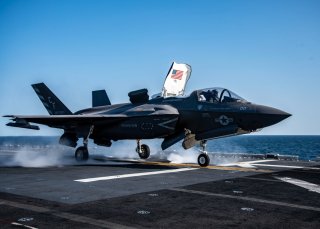 The U.S. Navy is again conducting dual-carrier operations in the Pacific, demonstrating an enhanced ability to project maritime power in the region.

Having done this before, the U.S. Navy is now adept at coordinating sortie generations and command and control attack missions between two dispersed carrier air wings. These missions greatly increase the amount of sorties flown and, therefore, the number of air attack missions a maritime military campaign would generate. This also entails an increased ability to network surface ships with fighter jets through advanced communications technology, data links, and surface ship radio systems.

The U.S. dual-carrier operations were mentioned as “provocative” in the Chinese government-backed Global Times newspaper, which wrote that the U.S. drills were intended to “lend support to secessionists on the island of Taiwan.”

The exercise took place near Okinawa off the southern coast of Japan, placing the carriers within reach of Taiwan and coastal areas near the Chinese mainland.

Should the United States launch sea-based air attacks to conduct larger-scale strikes on Chinese air defenses, dual-carrier operations would enable a much greater “mass” of fighters.  More aircraft might prove to be decisive in destroying Chinese ground-based air defenses, particularly when it comes to the use of stealth fifth-generation carrier-launched F-35C fighter aircraft.

The dual-carrier exercises are also quite significant in terms of forward presence and the ability to project air power in the event of a Chinese amphibious assault on Taiwan. China’s navy is growing quickly, becoming more technologically advanced, and of great concern to the Pentagon, yet the People’s Liberation Army Air Force does not seem to present a comparable challenge to the United States. China only operates a small number of fifth-generation, stealthy J-20 aircraft that need to be launched from land bases. During a Taiwan contingency, ship-launched F-35Cs might put the U.S. Navy in a unique position to establish air superiority and destroy a Chinese amphibious attack.  The U.S. Navy’s F-35s could prove decisive if they can respond quickly and are close enough to strike.

China’s military leadership may be well aware of this power projection imbalance, which may be one reason why the Global Times quoted experts who cited the lethality of China’s well-known “carrier-killer” anti-ship missiles. These missiles, such as the DF-21 and DF-26, are reportedly able to target and destroy U.S. carriers as far away as 2,000 miles off of Chinese coastlines. The Global Times asserted that Chinese warplanes, ships, and missiles could prevent outside powers from being able to “intervene” in a potential war scenario involving Taiwan.

“On China's doorstep, even the US cannot rival the PLA when it comes to China's core interests, experts said, noting that the PLA's ‘carrier killers’ including anti-ship ballistic missiles will join warplanes and vessels in denying external interference in the Taiwan question if it comes to that,” the Global Times wrote.

It makes sense that China might be particularly threatened by the successful projection of U.S. and allied maritime power in the Pacific, particularly in light of Japan’s recent decision to acquire $35 billion worth of F-35 fighters.