China's Navy Is Now the World's Largest (How Do They Compare to the U.S. Navy?) 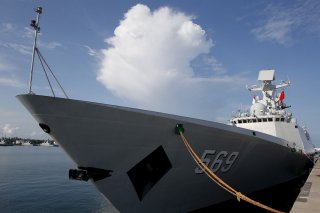 The Chinese Navy is already the largest in the world with more than 350 ships, including a fast-growing fleet of destroyers, carriers and submarines. This reality continues to raise concern and make an impression upon Pentagon and Navy weapons developers.

By the end of this decade, China is expected to operate as many as 360 to 400 ships, according to the Pentagon’s 2020 China Military Power report which, among other things, catalogues the pace and extent of China’s ambitious military modernization.

“China is the top ship-producing nation in the world by tonnage and is increasing its shipbuilding capacity and capability for all naval classes,” Chad Sbragia, Deputy Assistant Secretary of Defense for China, told reporters when addressing the report, according to a Pentagon transcript.

While China’s growing fleet is already much larger than the U.S. Navy’s 293 ships, some Navy leaders and observers make the point that pure numbers may not ultimately be the measure of superiority. The Pentagon report does make this point, yet with the clear caveat that China’s emerging fleet size is indeed concerning.

“There is certainly more to naval power than ship counts, total counts of the Chinese vessels, there’s tonnage, but for—and—but I would also draw your attention to weapons systems and it’s important to highlight the Chinese ship building advantages in terms of its size of fleet,” the report states.

China’s internal ship building apparatus is, according to the report, concerning. The text of the document cites the merging of China’s State Shipbuilding Corporation and the China Shipbuilding Industry Corporation, creating the world’s largest shipbuilder.

“China domestically produces its naval gas turbine and diesel engines, as well as almost all shipboard weapons and electronic systems, making it nearly self-sufficient for all shipbuilding needs,” the Pentagon China report states.

In order to better discern the scope of China’s shipbuilding enterprise, one need only to examine its current construction of carriers and destroyers.

Having already launched its second carrier, the Shangdong, the Chinese are already starting work on a third aircraft carrier, according to a May 2020 Congressional Research Service Report, “China Naval Modernization: Implications for U.S. Navy Capabilities.” The report says the PLA Navy may have as many as 400 ships and four aircraft carriers by 2025.

China’s first indigenously-built carrier, the second carrier in the fleet overall, appears to be modeled after its first carrier, the ski-jump-configured Ukrainian-built Liaoning.

The ship does not have large protruding deck masts or many external deck-mounted weapons and appears to have a blended body-bow with a smooth exterior. In some respects, the ship does appear to resemble some elements of the U.S. Navy’s stealthy USS Zumwalt destroyer.

Also, the central placement of the deckhouse, blended with a back-end area, might represent a deliberate effort to align the ship’s center of gravity and therefore decrease the possibility of capsizing in rough seas. The Nanchang has very similar-looking deck-mounted guns and a smooth, flat, roundly curved deckhouse. Like the USS Zumwalt, there is a decidedly linear, inwardly-angled hull-deckhouse connection.

Moreover, the radar panels of the Type 055 appear blended into the sides of the ship and the vessel appears to have narrow, yet flat command post windows. Overall, the exterior of the ship clearly seems to have fewer “sharp edges” or contours potentially more detectable to enemy radar.