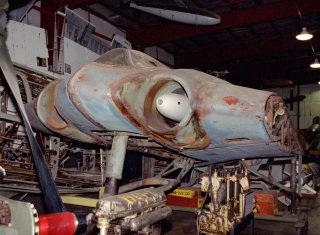 Late in the Second World War, Nazi Germany was losing—and losing badly. The Russians were beating the Germans to a pulp on the Eastern Front, and Nazi Germany was rapidly shrinking away from the Allies in the West. They were desperate for a miracle.

Hermann Göring thought he could bring about a miracle weapon. He put out a call to German aircraft manufacturers for a light bomber design that could meet his 3x1000 requirement. The design needed to carry 1,000 kilograms of munitions 1,000 kilometers at 1,000 kilometers per hour—at the time a wildly ambitious proposal. Despite this, the Horton brothers thought they could answer the call.

After the Treaty of Versailles ended World War I, Germany was severely limited in what kind of aircraft it could build. In response to this restriction, flying clubs sprang up in Germany, where enthusiasts could practice flying on unpowered gliders, which were not part of the restrictions.

The Horton brothers, Reimar and Walter, were a pair of aviation enthusiasts and amateur pilots who were in one such glider club. Both brothers designed and built a number of unique gliders that were very radical for their time.

The brothers glider designs were based on the flying wing principal. A flying wing does not have a clearly distinct fuselage. Instead, the plane is just a large wing—pilot, cockpit, landing gear, fuel, everything is stored internally.

The flying wing design has a distinct advantage over other airframe designs when considering drag. During flight, the wings, fuselage, tail, all parts of the plane experience some amount of drag, which both slows the plane down and increases fuel consumption.

Without a tail or other surfaces, a flying wing design naturally experiences less drag than other designs—though it is difficult to control without a tail. As the Horton’s designs became more sophisticated, so did their success in glider races in Germany.

The Horton brothers naturally saw Göring’s 3x1000 call as a chance to create the ultimate iteration of their flying wing design. A large wing could carry a heavy load of munitions and plenty of fuel, potentially meeting the two of the three requirements. The 1,000 kilometer per hour requirement was tricky. Jet engines would have to be used to get the airframe up to speed.

At this point the Hortons had moved to a different project and had passed on their flying wing to different design team with the German company Gothaer Waggonfabrik. The Gotha team were able to install jet engines—and actually get the flying wing (then known as the Horten Ho 229)—into the air, though it only flew three times. Three prototypes were built, one of which was destroyed in a crash after an engine failure.

Post-war, the United States initiated Operation Paperclip, a secretive program of securing German and Japanese weapons technology and getting designers and engineers to the United States to help the United States improve its own weapons programs. The Horten Ho 229 was no exception. The only surviving prototype now rests at the Smithsonian National Air and Space Museum.

Because of the ambitiousness of the project, some have suggested that the Horten Ho 229 was merely a project that kept the Horton brothers and their employees away from the much more dangerous front lines, where millions of soldiers and civilians were dying, which may be true.

Though the Horten Ho 229 contributed nothing to the direction of the war, a number of similar flying wing airframes eventually made it into the air in both the United States and Britain. It was no wonder weapon, and didn’t complete Göring’s 3x1000 call, but proved that flying wings could fly.