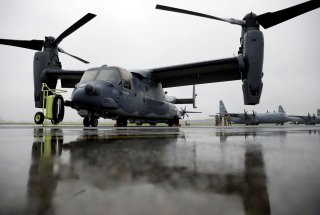 The Navy Osprey, called the CMV-22B, arrived at Naval Air Station North Island, San Diego, California, according to a statement from the aircraft’s maker, Bell-Textron. It is the third overall delivery to the U.S. Navy.

The new Navy Osprey is slated to replace the existing C2-Greyound currently performing the Carrier-On-Board, or COD, mission bringing forces, supplies and equipment from shore to ship and back again.

The Navy CVM-22B Osprey variant is designed to enable 1,150 miles of flight to the ship with extended fuel tanks. Alongside a needed range increase, the aircraft also includes a new radio for over-the-horizon communications and a built-in public address system, Navy developers have explained.

The new Osprey, slated to first be operational in coming months, will perform the full range of missions currently executed by the C-2s. This includes VIP carrier transport, humanitarian relief missions and regular efforts to deliver food, spare parts and equipment for sailors aboard carriers. Also, the aircraft has a reconfigurable cargo bay which can create space for twelve-stretchers for medical evacuation and transport.

The existing Corps MV-22 Osprey is also known for what is called “mounted vertical maneuver” wherein Marines use the speed, range and maneuverability of the Osprey to fly in behind enemy lines, land vertically and conduct a range of operations, including assisting amphibious missions. The Osprey can transport Marines, equipment and weapons systems with a combat radius of 450 miles. The new, in-development Navy variant will extend this combat radius to allow for ocean transport of supplies, equipment and weapons to assets on the open seas far from shore. The aircraft can also move important cargo between ships such as carriers and amphibious assault ships. The Osprey is also intended to operate as a tanker aircraft able to perform aerial refueling missions; the idea is to transport fuel and use a probe to deliver fuel to key aircraft such as an F/A-18 or F-35C.

The Navy has been working on the development of its new Osprey variant for several years, refining its configuration, technical systems and concepts of operations. For example, the Navy Osprey is engineered with an ability to better conduct missions at night, a scenario which greatly expands its mission scope. Several years ago, Osprey pilots conducted a series of maneuvers with an MV-22 tilt-rotor aircraft on board the USS Carl Vinson—in preparation for a Navy Osprey variant to reach operational status.

Exercises included delivering supplies, unloading faster with rollers and performing the range of missions now executed by the C-2. For instance, the Navy Osprey is expected to be much more effective at conducting dangerous missions, quickly loading and unloading cargo and operating at night.

An increased ability to transport food, equipment and weapons at night could increase the combat survivability of transport aircraft bringing supplies to carriers. After all, night-transport aircraft naturally present more difficult targets for potential enemies to accurately fire upon. Nighttime operations are also much more challenging because reduced visibility also means pilots need to rely more on sensors, avionics and instrumentation to navigate fast-changing conditions and land in turbulent seas.

Given the additional difficulty of navigating carrier landings amidst a range of fast-changing conditions, C-2 aircraft do not typically operate at night. While Ospreys tend to avoid transferring passengers in more risky, night-time operations, they do conduct MEDEVAC and logistics missions at night. Osprey crews go through specific night-time ocean survival training in preparation for operating at night and in dangerous conditions, Navy officials said.

An ability to conduct night missions will enable the Osprey to take on a wider set of missions than those performed by a C-2. Helicopter or tilt-rotor carrier landings do not require the same amount of preparation as that needed for a C-2 landing; there is no need for a catapult and a tilt-rotor naturally has a much wider envelope with which to maneuver.

A Navy statement says the CMV-22B is expected to field with Initial Operational Capability (IOC) and deploy for the first time (projected) in 2021. While the Program of Record has forty-eight CMV-22s projected, the Navy currently plans to procure only forty-four of the aircraft.