Cursed: Is the Cruiser “Cowpens” the U.S. Navy’s Unhappiest Ship? 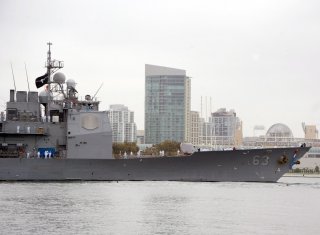 There are 21 other vessels outwardly identical to the U.S. Navy guided-missile cruiser USS Cowpens. But there are no vessels just like Cowpens.

For Cowpens is cursed. Fatal accidents. Near-disasters at sea. And a peculiar hex that seems to almost guarantee that her skippers ignominiously will end their careers aboard the troubled ship.

A crisis in 2014 was the most bizarre. Capt. Greg Gombert fell ill in January that year while commanding Cowpens on a seven-month deployment to the Western Pacific. Instead of reporting his condition and evacuating to a hospital, Gombert “holed up in his cabin to recuperate,” according to Navy Times.

Worse, Gombert “began to push responsibilities down to the next most senior officer,” who happened to be an engineer with just 11 years’ experience—far too junior to command a 567-foot Ticonderoga-class cruiser packing more than a hundred long-range guided missiles.

The Navy has 22 of the cruisers, each among the most powerful surface warships, well, ever.

For half the deployment—three months in all—engineer Lt. Cmdr. Destiny Savage totally was in charge aboard Cowpens, even sailing the blocky cruiser perilously near tanker ships in order to refuel—a dangerous procedure requiring years of practice to safely perform.

Cowpens returned home to San Diego in April in “poor material condition,” according to investigators. Navy officials promptly fired Gombert and his senior enlisted chief Gabriel Keeton, a veteran sailor who should have known better than to allow his captain to secretly convalesce aboard a front-line warship within shooting distance of China.

Gombert was Cowpens’ third captain since 2010 to get fired for weird or unethical behavior. And that’s only part of the cruiser’s reputation for trouble.

In naval tradition there are happy ships and unhappy ones. Happy ships have a strong tradition of sound leadership and good fortune that results in a sort of self-sustaining culture of professionalism. In short, sailors believe their ship is good and special—and they act accordingly.

By contrast, unhappy ships are ones where officers or crew screw up or suffer bad luck just often enough to create an expectation among sailors that such misfortune will continue. Novelist Patrick O’Brian described many unhappy ships in his famous series of naval adventures set in the Royal Navy in the early 19th century.

“The 30-gun Pomone was the unhappy ship whose captain was laid up in Funchal with a badly broken leg, unlikely to recover,” O’Brian writes in The Hundred Days, “and whose second lieutenant was confined to his cabin to await trial for an offense under the 29th Article of War, which dealt with ‘unnatural and detestable sin,’” a.k.a., sodomy.

Pomone’s fictional crew was “very upset,” O’Brian writes—and the novel’s hero, Commodore Jack Aubrey, is reluctant to include Pomone in his squadron.

Cowpens seems to share Pomone’s blight. In 2000, a sailor named Stewart McConnell “fell from the main mast and was killed when he struck a fender just aft of the mid-ship’s quarterdeck,” according to the vessel’s official history. “McConnell’s death greatly saddened the crew.”

Ten years later there was an eerily similar tragedy. Cowpens sailor Christopher John Perino tumbled from the cruiser’s bridge wing into a dry dock. The Navy investigated Perino’s death as a possible suicide.

The leadership troubles began in 2009. Capt. Holly Graf was the first woman to command Cowpens … or any Navy cruiser. But Graf was a tyrant who verbally abused her crew and even forced them to walk her dogs.

The Telegraph recalled some of the names Graf’s unhappy sailors called her behind her back. “The Sea Witch, Horrible Holly and Miss Bligh, in a reference to the tyrannical captain of HMS Bounty who caused the most famous mutiny in the Royal Navy’s history in 1789.”

Dozens of sailors complained. And in January 2010, the Navy finally intervened, firing Graf from command and effectively ending her career.

Capt. Robert Marin took over from Graf at Cowpens’ then-home port in Yokosuka, Japan. But two years later the Navy fired Marin, too, after discovering that the married skipper was sleeping with another officer’s wife.

The cruiser’s volatile commanding officers weren’t her only misfortune. On Dec. 5, 2013, Cowpens was in the Western Pacific, hot on the trail of China’s sole aircraft carrier Liaoning. Gombert was still well and in charge.

As is routine—and perfectly legal in international waters—the cruiser was sailing near Liaoning in order to assess the refurbished flattop’s capabilities. But the Chinese were having none of it. One of Liaoning’s escorts—an amphibious landing ship—violently maneuvered in front of Cowpens, cutting her off at a distance of just 200 yards and nearly causing a collision.

Gombert’s crew reacted expertly, turning to avoid the bullying vessel and promptly radioing to the Chinese crew. The subsequent conversation was “tense but professional,” a Pentagon official told The New York Times.

The unhappy vessel sailed to California for decommissioning and, eventually, dismantling. Having been ripped from their home vessel and now sailing a dying ship, the 400-person crew suffered “anxiety,” the Navy reported.

Congress came to the rescue, adding funds to keep Cowpens in service. In September 2013, the cruiser sailed for the Western Pacific under Gombert’s command. After surviving the close encounter with the Chinese in December, Gombert got sick in January.

And that’s when things got really strange.

Gombert “retreated for an extended period of time” into his cabin. Cowpens sailors told investigators their captain was in his cabin for up to two months, venturing out for only a few minutes per day.

There apparently was no justifiable medical excuse for such hermit-like behavior. On falling ill, Gombert had “sought and received competent and appropriate medical treatment,” the Navy found. The skipper’s unspecified illness “would not have ordinarily been physically debilitating.”

And tellingly, investigators discovered that Gombert did leave his cabin to go ashore during port calls, during which sailors typically wine, dine and carouse for a few days before stumbling back to their ship.

Gombert’s condition “did not justify his inattention to his duties,” the Navy concluded. Indeed, having scrutinized the lethargic skipper’s past performance, investigators “were surprised to find clear and convincing evidence of this lack of command focus which predated his illness.”

In other words, Gombert apparently had been lax before, although perhaps not the extent that made him essentially a stranger aboard his own ship in early 2014.

Gombert had disliked his executive officer and forced the second-in-command to leave the ship ahead of schedule in late 2013. With a gap between X.O.s, Gombert elevated chief engineer Savage, a woman, to acting executive officer. Gombert’s bosses approved the temporary promotion for a period of three weeks, but Gombert stretched it out to four months without approval.

The skipper had an “unduly familiar” relationship with Savage. That doesn’t mean they were sleeping together. But it does help explain why Gombert felt comfortable more or less handing over command of his cruiser while he camped out in his cabin, slowly and secretly recovering from his illness.

The slightest error on Savage’s part could have caused a collision endangering hundreds of people and billions of dollars of hardware.

And while Savage played captain, no one on Cowpens said anything to the Navy chain of command. Worst of all, Command Master Chief Keeton, the ship’s top enlisted sailor, let the whole thing slide—declining to intervene even as the crew’s skills began to slip.

The Navy wised up to Gombert’s unofficial sabbatical after Cowpens returned to San Diego in April this year. “A post-deployment safety survey … served to bring into sharp focus the failure of [Gombert’s] command,” the Navy reported.

After months without a qualified leader, the crew no longer could safely sail the cruiser.

“It is a testament to the competency and resilience of her crew that they were able to complete the mission and bring the Cowpens home safely without serious accident or injury,” investigators claimed.

But that doesn’t mean Cowpens isn’t a cursed, unhappy ship. The cruiser spent four years in a shipyard undergoing modernization, rejoining the fleet in January 2020. Hopefully, her future is brighter than her past.