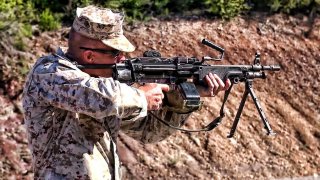 In the nineteenth century, what is today the modern Czech Republic became a crucial region for arms production in the Austro-Hungarian Empire. The industrial base proved to be of importance during the Second World War after Nazi Germany's annexation of the territory. During the communist era, Czechoslovakia continued to be a major producer of small arms—and that has continued following the end of the Cold War.

The Czech Republic remains among the best in Europe in the field of heavy industry, including the production of military hardware and small arms. As a NATO member, efforts have continued to increase the Czech military's mobility and lethality of its ground troops as well as to enhance the interoperability with other NATO members and allies.

In 2020, the country purchased approximately 39,000 small arms for its military forces in a deal worth a reported ZK2.35 billion ($92.5 million) with the national company Česká zbrojovka Uherský Brod (ČZUB). It included some 16,000 assault rifles, 21,000 pistols and 1,600 grenade launchers.

Now as 2021 comes to a close, Prague has signed a deal that would see it acquire additional small arms from a NATO partner. Earlier this month, the Czech Ministry of Defense (MoD) announced that the army would acquire a total of 949 FN Herstal Minimi machine guns, chambered in either 7.62mm or 5.56mm calibers, in the deal worth more than $50 million. Deliveries of the Minimi machine guns are scheduled to take place from 2022 to 2025 and will include sights, armor kits, cases, and packaging.

The Czech armed forces are currently armed with a number of different types of machine guns in 7.62mm and 12.7mm (.50 caliber) calibers including M2 Browning, NSV, M134 Minigun, PK 7.62mm machine gun, Rheinmetall MG 3, M60, and M48 from the United States and United Kingdom. Per the Czech MoD, the acquisition of these new machine guns is the third part of a modernization plan that was launched by the Czech armed forces to receive new small arms. The Minimi will be used by the Czech Army's infantry units.

First developed in the 1970s, the FN Minimi is currently in service with more than seventy-five countries around the world, and it is employed as the standard-issue light machine gun for regular and Special Forces. It is manufactured at the FN Herstal facility in Herstal, Belgium while the versions employed by the United States military are produced at the U.S. subsidiary FN Manufacturing LLC in Richland County, South Carolina. It is likely that the versions that will be supplied to Prague will come via Herstal.

The Minimi features a gas-actuated long-stroke piston system, and fires from an open bolt, which reduces the danger of a round "cooking off" after extended periods of continuous fire. The weapon also utilizes a manually adjustable gas valve with two pistons, normal and adverse, which allow the cyclic rate of fire to be increased from 700-850 rounds per minute to 950-1,150 rounds per minute in extreme conditions.

The Mk3 is the latest upgraded version of the original Minimi, and it features an ergonomic buttstock that can be adjusted to accommodate a soldier's body armor other load-bearing equipment. The buttstock can be adjusted in length to five positions, while the cheek rest height has four positions. This improved version is equipped with an ergonomic cocking handle that can provide the operator with an improved grip, even if they are forced to use their "off-hand."

The light machine gun also features an integrated feed cover with an upper rail, lower and lateral rails, adjustable-height bipod, feed tray with belt retaining pawls, and quick-change barrel. The weapon can also be used with a heat shield to reduce the risk of the operator inadvertently touching the barrel after extended firing. As noted, the FN Minimi is produced in both 7.62mm and 5.56mm versions.

Earlier this year, Norway also adopted the Minimi—and it has clearly become the NATO standard.