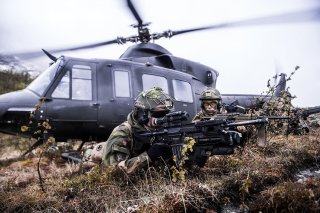 Given that Norway and Belgium are both NATO members, it isn't surprising that the former's military would look to its European ally when it came time to acquire new small arms. The Norwegian Ministry of Defense (MoD) announced this month that it has awarded a contract to the Belgian-based firearms manufacturer Fabrique Nationale (FN) Herstal for 4,000 FN Minimi Mk3 (third-generation) light machine guns.

The Belgian company's gain comes at the expense of three American-based firearms makers.

Under the terms of the multi-year contract, which FN Herstal announced on September 3, it will provide the 7.62x51mm NATO caliber machine gun and associated parts for seven years, as well as maintenance and support equipment for the next twenty years.

The decision to select FN Herstal over its competitors came following a program that was initiated by the Norwegian MoD more than two years ago, and which included a series of technical evaluations and commercial negotiations.

"The Norwegian decision is yet more proof of the trust placed in FN Herstal by the Norwegian Ministry of Defence," the Belgian firearms firm said in a press release that was posted by Army-Technology.com. "It also marks a new major success for FN Herstal on several levels. Not only due to its size, but also because it confirms FN Herstal's leadership as the partner of choice for European and NATO armed forces."

Norway is the latest country to select and standardize the FN Minimi 7.62 for its armed forces. At present, the gun is used by the security and military forces of around 75 countries; while the Minimi is also manufactured under license in Australia, Canada, Italy, Japan, Indonesia, Greece, Switzerland, and Sweden.

History and Developments of the FN Minimi

The FN Minimi was first introduced in the 1970s, and it has been available in 5.56mm and 7.62mm calibers. It is equipped with two massive locking lugs and utilizes a gas-actuated long-stroke piston system. The Mk3 is the latest upgraded version of the original Minimi, and it features an ergonomic buttstock that can be adjusted to accommodate a soldier's body armor other load-bearing equipment. The buttstock can be adjusted in length to five positions, while the check rest height has four positions.

The Mk3 version also is equipped with an ergonomic cocking handle that can provide the operator with an improved grip, even if they are forced to use their "off-hand." The light machine gun also features an integrated feed cover with an upper rail, lower and lateral rails, adjustable-height bipod, feed tray with belt retaining pawls, and quick-change barrel. The weapon can also be used with a heat shield to reduce the risk of the operator inadvertently touching the barrel.

There are also variants of the Minimi Mk3 that have a short or long barrel along with a telescopic (para model) or fixed buttstock (Standard model). The weapon can be upgraded partially or completely by using a conversion kit to meet the user's preference. Additionally, the FN Minimi 7.62 Mk3 can be converted to chamber 5.56x45mm.