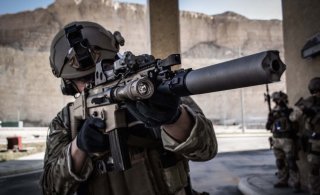 When one thinks of Belgium chances are they think of chocolate, waffles, fries, beer and diamonds—but missing from the list is probably firearms. Yes, the European country is the world's number one exporter of chocolate while Antwerp has been the diamond capital of the world since the early fifteenth century and it could also be noted that the nation, which has only been independent since the 1830s, produces nearly 80 percent of the world's billiard balls.

However, Belgium is also home to Fabrique Nationale Herstal, the largest exporter of military small arms in Europe!

Known today as FN, the firm, which was founded in 1889 by Henri Pieper to produce 150,000 Mauser Model 1889 rifles under contract from the German Paul Mauser, was set up in the city of Herstal near Liège. To this day, the Belgium-based facilities houses all departments in charge of designing, developing, manufacturing, testing, marketing and selling FN weapons and weapon systems.

In 1897 the company began a partnership with prolific American firearms designer John Moses Browning, whose contributions included several notable firearms such as the Browning Auto-5, the first successful mass-produced semi-automatic shotgun and the FN Browning M1900, the first production handgun to feature a slide—a feature that is still predominant in semi-automatic handgun designs 120 years later.

A decade after he produced the M1900, Browning developed the FN Model 1910, a blowback-operated, semi-automatic pistol that through a chain-of-events resulted in the near destruction of the company. While many of Browning's designs were also produced by Colt at the time, the FN Model 1910 was only produced in Europe and among one of its users was 19-year-old Gavrilo Princip, a member of the Young Bosnia and assassin of Archduke Franz Ferdinand!

That event was the catalyst that ignited the First World War in August 1914 and by the autumn of that year, Belgium was overrun. However, FN outsourced production to a facility in Birmingham, England, and started a relationship that was to last well into the twentieth century.

After the war, Browning continued to work with FN and was developing the Browning Hi-Power when he died. The firearm was completed by FN’s Dieudonné Saive but wasn’t released until 1935. It had the unique distinction of being used widely by both Allies and Axis soldiers during World War II and remained in production until 2017.

During the early Cold War, the firm developed the FN-FAL rifle, which was one of the most successful of the NATO military rifles and was used in numerous conflicts, and saw service with more than ninety nations worldwide. The arms maker also produced the Vigeneron submachine gun, a rugged but affordable submachine gun that saw use in numerous conflicts, most notably of which was in the Congo Crisis of the early 1960s.

FN has continued to produce military and civilian firearms, and in the 1980s released the Browning BDA, the last handgun based on the Hi-Power design. In the 1990s the company released the FN FNP, a family of polymer-framed hammer fried guns that only saw limited adoption but this was dated into the FNX in 2009 for the abortive Joint Combat Pistol trials.

The company also produced the FN P90, a compact personal defense weapon (PDW), which was designed as a small but powerful firearm for vehicle crews, operators of crew-served weapons, support personnel and even counter-terrorist units. The futuristic-looking weapon, which features a transparent magazine on its top, remains the “go-to” choice for science-fiction films and has appeared in such movies as The Hunger Games and Looper, as well as in sci-fi TV series such as Stargate: SG1, V, and episodes of Doctor Who.

Among the most recent military weapons produced by FN is the SCAR (Special Operations Force Combat Assault Rifle), a gas-operated, short-stroke gas piston assault/battle rifle. Introduced in 2009, it is available in an assault rifle SCAR-L (light) configuration, chambered for 5.56x45mm NATO, while the SCAR-H (heavy) version is chambered for 7.62x51mm NATO. As of 2015, the FN SCAR was in service in more than twenty countries—proving that the company has come a long way from the day of producing a Mauser-designed bolt action rifle for just the Belgian Army.