The Danger of Operating Without Perimeter Security 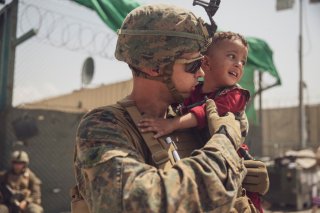 The tragic death of U.S. service members in Afghanistan is likely to generate far more questions than answers as political and military leaders struggle to respond effectively, pursue those responsible, and, perhaps most of all, safeguard and evacuate remaining Americans.

A fast-unfolding, tragic and somewhat surprising set of circumstances created an extremely dangerous circumstance, wherein U.S. servicemembers and friendly Afghans were unprotected by a secure perimeter. Essentially, they were massing in groups along the outside of a protected walled-in area of the Airport in hostile territory exposed to enemy attack. It may not have been possible to establish any kind of temporary or makeshift perimeter surrounding the gathering crowds nearing the airport. There may not have been time or any structures in place which could be used to establish safe zones or protected areas.

It may not be clear or known yet if the attack, reported to be carried out via suicide bomber, arrived with an indiviual bomber strapped with bombs or a vehicle packed with explosives. Either way, the U.S. military is extremely familiar with these kinds of attacks.

The incident highlights the importance of something the U.S. military now has a lot of experience with given its fifteen years of counterinsurgency warfare: perimeter security. Forward operating bases in Iraq and Afghanistan have for years been protected by checkpoints manned with experienced and well-trained soldiers capable of making split-second discernments to safeguard forward positioned troops. This meant the use of barricades, armed soldier checkpoints, and highly controlled points of access. Should a vehicle fail to slow down or heed directions, then soldiers were forced to make an instant and potentially lethal decision. A wrong call could cost the lives of innocent civilians intending no harm or put large numbers of U.S. forces at risk of massive bomb attacks. Vehicle-borne improvised explosive devices were a persistent and serious threat throughout years of counterinsurgency operations for the U.S. military, a circumstance which led U.S. forces, weapons developers, and tacticians to establish tactics, protocols, sensors, and procedures to maximize security.

Defenses were also highly technical for U.S. and coalition forces as well, given the rapid increase in robotic vehicles, bomb-detecting sensors, and overhead drones maintaining surveillance. All of these variables, combined with ongoing U.S. military efforts to refine tactics, techniques, and procedures as part of a consistent effort to adjust to a changing threat. The experience will certainly become more relevant depending upon any potential course of action taken in response by the U.S. military. One thing is clear, the U.S. military is skilled at conducting counterinsurgency and counterterrorism operations and, should it be called upon, will be capable of executing lethal search and attack missions to hunt down and kill the attackers.