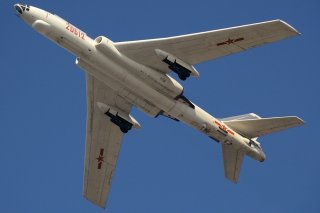 However, it remains unclear whether the H-6 bomber would actually pose a serious risk to Taiwan given its potential vulnerability to air defenses, surface ships, and Taiwanese and allied aircraft.

The PLAAF would need to establish air superiority in order for the H-6 to fly at low altitudes for mine-laying or precision-bombing missions, something which would not be at all assured in any confrontation over Taiwan with the United States. Whether the United States and its allies have advanced air defenses in the South China Sea is unclear, however, there are established systems already in Taiwan, Japan, and South Korea which could pose problems for the PLAAF.

In fact, a bomber such as the H-6 would be extremely vulnerable to the U.S. Navy’s ship-launched, fifth-generation aircraft and easily located and targeted by drones and networked ground surveillance systems. An aircraft as large as the H-6 could also be vulnerable to anti-aircraft fire coming from surface ships, depending on how low it was flying to lay mines in littoral areas. The real added value when it comes to the functional impact of a large, B-52-like heavy bomber would more likely be in its standoff weapons, including extremely high-altitude precision bombs or the use of long-range precision cruise missiles.

Otherwise, precision bombing missions would need to come from an undetected, high-altitude stealth bomber such as China’s new H-20 or be executed by fighter jets during or after a war to establish air supremacy. Should the United States operate amphibious assault ships and aircraft carriers in the region in any measurable capacity, sea-launched fifth-generation aircraft such as the F-35B and F-35C Joint Strike Fighters would likely make it extremely difficult for large Chinese bombers to operate with any measure of success.

While waiting for large numbers of its emerging H-20 bomber to arrive, China has been consistently upgrading its legacy Xian H-6 bomber to a degree that continues to generate U.S. concern.

The H-6, whose origins can be traced back to the Cold War-era Tu-16 strategic heavy bomber, was mentioned thirty-three times in the Pentagon’s 2020 China Military Power report, according to a report from Flightglobal.

The report says the H-6 will likely fly into the 2030s by virtue of an ongoing series of significant upgrades. The aircraft’s newer K, J, and N variants are powered by two more efficient Soloviev D-30 turbofan engines.

Adding to U.S. concerns is that China’s new H-20 bomber is expected to fly alongside and ultimately replace the H-6. However, part of why the H-6 continues to be extended relates to the time it may take to produce and deploy the H-20 in sufficient numbers.

This kind of phased pattern does resemble, to some extent, the U.S. Air Force’s plans for the B-2 Spirit and B-21 Raider stealth bombers. The thirty-year-old B-2 is expected to fly for another decade as additional B-21s are deployed. Therefore, much like China has continually upgraded its H-6 bomber, the Air Force keeps modernizing the B-2 stealth bomber with new weapons, sensors, and computer technology to keep the aircraft relevant and combat-ready in future warfare scenarios. The B-2 bomber, for instance, is receiving advanced new Defensive Management System sensors designed to locate and help aircraft elude enemy air defenses as well as a 1,000-fold faster computer processor and upgraded variants of the B-61 Mod 12 nuclear bomb.