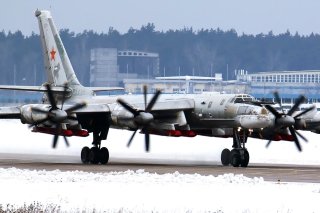 Here's What You Need to Remember: The new H-6N variant of the venerable Chinese bomber first appeared over Beijing during preparations for celebrations marking the 70th anniversary of the founding of the People’s Republic of China. Military parades and fly-overs took place on Oct. 1, 2019.

A Chinese magazine might have revealed a new and potentially powerful anti-ship and land-attack missile, Roland Oliphant reported for The Telegraph last year.

A centerfold graphic in a recent issue of Modern Ships, a government-produced magazine, depicts the Chinese air force’s new H-6N bomber carrying a previously unknown large missile under its belly, according to Oliphant.

The computer-generated image could represent the public’s first glimpse of the CH-AS-X-13, an air-launched variant of the DF-21D anti-ship ballistic missile.

The Chinese air force has modified a small number of H-6s apparently to carry the new missile, which could pose a serious danger to U.S. Navy vessels and other forces operating in the western Pacific. Aircraft carriers, in particular, could be at risk.

The new H-6N variant of the venerable Chinese bomber first appeared over Beijing during preparations for celebrations marking the 70th anniversary of the founding of the People’s Republic of China. Military parades and fly-overs took place on Oct. 1, 2019.

But Trevithick thinks it’s the CH-AS-X-13, which apparently is “the primary weapon for the H-6N.” The Hong Kong South China Morning Post claimed the H-6N also is designed to carry the new DF-100 anti-ship cruise missile and the DR-8 supersonic reconnaissance drone.

The DR-8 appeared on a trailer during a rehearsal for the October 2019 anniversary celebration. The drone in theory could conduct fast damage-assessment missions in the aftermath of missile strikes. “The DR-8 would be expected to play a key role should there be a conflict with U.S. aircraft carrier strike groups in the South China Sea or Western Pacific,” South China Morning Post reported.

H-6Ns with CH-AS-X-13s could pose a serious threat to U.S. and allied forces, Malcolm Davis, a senior analyst with the Australian Strategic Policy Institute, told Oliphant. "The combination of the range of that system -- [more than 1,000 miles] plus the range of the H-6N -- would give China greater ability to strike either at land targets as far out as Guam, or potentially, if equipped with an anti-ship mode, maritime targets at similar range.”

But Global Times, China's state-owned English-language daily, sidestepped questions regarding the H-6N and its possible new missile. The daily dismissed Modern Ships’s centerfold as fantasy. "The images are computer-generated, merely conceptual and have no official background," Global Times stated, citing an "insider" source.