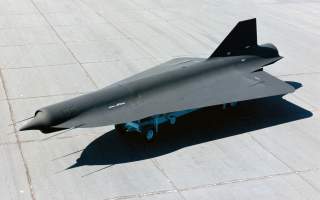 A new, apparently very fast drone type made its first public appearance at a rehearsal for a national celebration in Beijing on Sept. 21, 2019.

The long, narrow unmanned aerial vehicle, reportedly designated DR-8, appears to be configured for supersonic flight. It likely is a reconnaissance craft.

The DR-8 appeared on a trailer during a rehearsal for Oct. 1, 2019 celebrations commemorating the 70th anniversary of the founding of the People’s Republic of China.

“The DR-8 would be expected to play a key role should there be a conflict with U.S. aircraft carrier strike groups in the South China Sea or Western Pacific,” South China Morning Post reported.

The reconnaissance drone’s appearance at the rehearsal drew attention partly because it loosely resembles a supersonic UAV that was retired by the US more than four decades ago – the D-21.

The US used the drone for spying missions in China and a number of them crashed during operations, leaving their remnants scattered in various locations across the country. One of the crashed D-21s was put on display at Beijing’s Military Museum a few years ago.

According to Zhou Chenming, a Beijing-based military commentator, the DR-8 could travel faster than the D-21 – whose maximum speed is Mach 3.3 – letting it penetrate the enemy’s air defenses and return intact with intelligence.

The same rehearsal provided the first evidence of a new type of Chinese anti-ship missile. The H-6N variant of China’s venerable H-6 bomber -- itself a clone of the Soviet Tu-16 -- first appeared over Beijing during preparations for the anniversary celebrations.

The H-6Ns feature an under-fuselage recess that could accommodate a single, very large missile. The new munition, possibly a variant of the DF-21D ballistic anti-ship missile, could pose a serious danger to U.S. Navy vessels operating in the western Pacific. Aircraft carriers in particular could be at risk.

China already possesses a wide array of anti-ship weaponry including air-launched cruise missiles and land-based DF-21Ds. The emergence of the DR-8 and H-6N packing a possible air-launched DF-21D could hint at a new anti-ship capability that could complement existing systems.

The H-6Ns would launch their DF-21Ds. DR-8s could speed in to inspect the damage. The Chinese military already has begun experimenting with the DR-8, Shanghai-based military commentator Shi Lao told South China Morning Post.

“The PLA had been using the drone – which can reach strategic locations as far away as the Western Pacific, including Guam – for some time,” the newspaper reported, citing Shi. “In fact, this UAV [the DR-8] entered into service a while ago,” Shi said.

China is poised to debut other new military systems at the Beijing commemorations, reportedly including the Sharp Sword armed UAV. Sharp Sword is one of China’s oldest modern drone types, having first appeared in photos in 2013.

Powered by a single jet engine and resting on tricycle landing gear, the Sharp Sword seems to sport the flying-wing shape shared by several U.S.-made armed-drone prototypes. The flying wing planform, also used by the U.S. B-2 stealth bomber, is ideal for radar-evading designs.

Beyond its basic shape and possible radar-evading qualities, not much is known about the apparent new drone. But the Pentagon in a 2013 report warned that "the acquisition and development of longer-range unmanned aerial vehicles ... and unmanned combat aerial vehicles, will increase China’s ability to conduct long-range reconnaissance and strike operations.”