DARPA is Eyeing a High-Tech Contact Lens Straight Out of 'Mission: Impossible' 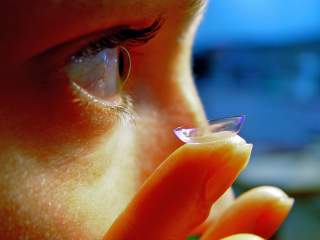 The Defense Advanced Research Projects Agency (DARPA) is reportedly interested in a new wirelessly-connected contact lens recently unveiled in France, the latest in the agency's ongoing search for small-scale technology to augment U.S. service members' visual capabilities in the field.

More importantly, the new lens can perform its functions without a bulky external power supply, capable of “continuously supply[ing] a light source such as a light-emitting diode (LED) for several hours,” according to the IMT Atlantique announcement.

“Storing energy on small scales is a real challenge,” said Thierry Djenizian, head of the Flexible Electronics Department at the Centre Microélectronique de Provence Georges Charpak and co-head of the project.

The lens was primarily designed for medical and automotive applications, but according to French business magazine L'Usine Nouvelle ('The New Factory'), the lens has garnered interest from both DARPA and Microsoft, which was recently contracted by the the U.S. Army to furnish soldiers with with its HoloLens augmented reality headset.

DARPA's been on the hunt for a high-tech eyepiece more than a decade, and the agency has funded several similar projects in recent years.

In January 2012, DARPA announced that U.S.-based tech firm Innovega was developing “iOptiks” contact lenses designed to enhance normal vision by projecting digital images onto a standard pair of eyeglasses like a miniaturized heads-up display, “allow[ing] a wearer to view virtual and augmented reality images without the need for bulky apparatus,” as the agency put it.

Three years later, researchers at Switzerland's École Polytechnique Fédérale de Lausanne (EPFL) unveiled a DARPA-funded contact lens that “magnifies objects at the wink of an eye,” The Guardian reported, although researchers concluded that the technology was better suited for age-related visual deterioration rather than battlefield applications.

“[DARPA researchers] were really interested in supervision, but the reality is more tame than that,” researcher Eric Tremblay told the American Association for the Advancement of Science at the time.

These past projects, like most other blue sky research projects pursued by the DARPA, have likely informed the Pentagon's research and development of augmented reality tech that U.S. military planners have increasingly pursued in recent years. And the technology is only poised to improve: as Wired recently reported, big tech companies like Google, Sony, and Samsung are all pushing the envelope when it comes to consumer-marketxed augmented vision tech.

But when “smart” contact lenses will actually hit Pentagon armories, like most futuristic DARPA efforts, remains to be seen. In the meantime, it looks like U.S. service members in search of enhanced vision will have to stick to their “birth control glasses.”