DARPA Is Looking for a Way To Shoot Down Hypersonic Weapons 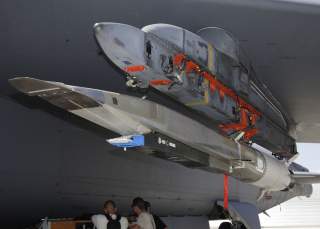 DARPA, the Pentagon's pet research agency, wants an interceptor that can stop weapons that are hypersonic (travel faster than Mach 5). The agency has begun soliciting proposals for Glide Breaker, its project to stop boost-glide vehicles that are lofted high into the atmosphere atop a ballistic missile, and then glide down to Earth. The current exemplar is Russia's Avangard, touted by President Vladimir Putin as unstoppable by anti-missile defenses. The Avangard is lofted by a giant RS-28 Sarmat ICBM, and then glides down to its target at Mach 20. But China and the U.S. are also developing boost-glide vehicles.

Or put another way, counter-hypersonics encounters all the difficulties of ballistic missile defense against ICBMs, and then some. "The most obvious challenge is the maneuverability of HGVs, which makes it very difficult to maintain track on the vehicle and plan an intercept course using our current capabilities," George Nacouzi, an engineer at the RAND Corp. think tank, told the National Interest. "Flight altitude is also challenging for our current systems. The HGV may fly too high for many endo-atmospheric interceptors and too low to be detected and tracked early by long range radars."

DARPA may have captured the real value of counter-hypersonic defenses in a notice for a July 2018 Proposer's Day, where industry had a chance to learn about the project. The notice stated that "a key figure of merit is deterrence: the ability to create large uncertainty for the adversary’s projected probability of mission success and effective raid size."