Is DARPA Moving to the "Dark Side" With Its Fully-Robotic NOMAR Warships? 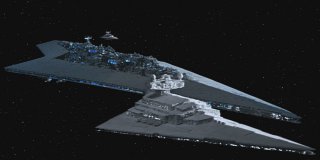 The efforts to build an unmanned warship are moving forward—last week an official from the Defense Advanced Research Projects Agency (DARPA) shared some details on the No Manning Required, Ship (NOMARS) program, which was announced earlier this year.

“NOMARS will challenge the traditional naval architecture paradigm, designing a seaframe from the ground up with no provision, allowance, or expectation for humans at sea,” according to a solicitation posted by DARPA from January as reported by DefenseNews. “By removing the human element from all ship design considerations, NOMARS will demonstrate significant advantages, to include size, cost (procurement, operations, and sustainment), at-sea reliability, survivability to sea-state, survivability to adversary actions (stealth considerations, resistance to tampering, etc.), and hydrodynamic efficiency (hull optimization without consideration for crew safety or comfort).”

The vessels would also have no living quarters, galleys, lavatories or other “creature comforts” since there are no living create needs be on board. “The program also will strive for greater hydrodynamic efficiency via hull optimization without requirements for crew safety or comfort,” DARPA noted according to Naval-Technology.

The artist’s concept, which has been widely shared online, has already caught the eye of a few writers who have noted its similarity to the “Imperial Star Destroyers” from the Star Wars films. Jared Keller, writing for Task and Purpose suggested, “As if you needed more proof that the U.S. military is absolutely a part of the Galactic Empire and not the Rebel Alliance: the Pentagon is eyeing a new robot warship that looks like something straight out of a galaxy far, far away.”

Sure, there is more than a passing resemblance of the Imperial starship to the artist’s concept for DARPA’s NOMAR—but one is completely fictional apart from scale models, while the other is just a rendering. The fact that one is for outer space while the other is a blue navy vessel is another important consideration.

But so is the fact that military hardware has long evoked the past, even if the designer never intended for such comparisons. That was certainly the case when the United States Army introduced the PASGT (Personnel Armor System for Ground Troops) helmet in the early 1980s it reportedly earned the nickname “Fritz” as some saw that it was similar in shape to the German Model 1935 steel helmet used during the Second World War. There may be a passing resemblance, but its designers simply sought to provide the best protection to the side of the wearer’s head—so in no way was it a copy of the “Nazi helmet.”

For those who try to suggest that Star Wars influences the modern military should consider a few facts as well. First, there were “Storm Troopers“ who fought for a different Empire—as in Imperial Germany—during the First World War. The tunics and pants worn by Imperial officers in the films were also based on the uniforms of German Uhlans or mounted lancers, while the hats seem similar to the ones worn by the Imperial Japanese Navy during World War II.

Then there is the fact that the armorer for the sci-fi film relied on real-world small arms that were dressed up to look like high tech “blasters”—and if you look closely you’ll see British Sterling submachine guns and German MG-34 machine guns carried by Imperial Storm Troopers, while Han Solo carries what is actually a late 19th century Mauser C-96 “Broomhandle” pistol.

However, science fiction and military hardware regularly overlaps—look no further than the Boeing YF-118G, which was nicknamed “Bird of Prey” due to its resemblance to a Klingon spaceship from Star Trek. So maybe the U.S. Navy should embrace its “dark side” called the NOMAR a Star Destroyer after all!