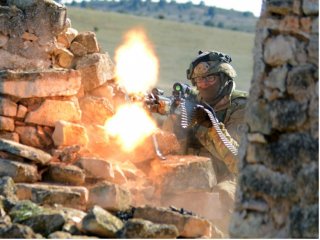 Jetpacks are a concept mostly associated with science fiction, and other fictional movies and TV shows set in the future or in a galaxy far, far away. There are a couple of companies that build jetpacks for private usage, and last year, there were multiple reports of a man in a jetpack being spotted by airplanes in the Los Angeles area. The consensus seems to have been established that those jetpacks were actually drones, meant to look like a man in a jetpack.

Now, jetpacks are in the news for another reason- the possible use of them for military applications.

Task and Purpose reported this week that the Defense Advanced Research Projects Agency (DARPA) recently asked for ideas for a “portable personal air mobility system,” one that could be used for (per the report) special operations, search and rescue, urban combat, maritime interdiction, and even logistics missions.

The official description asks for proposals for “submissions of innovative research concepts in the technical domain(s) of Air Platform, Ground/Sea Vehicles. In particular, DARPA is interested in understanding the feasibility of a portable personal air mobility system.” The request will remain open through April 20.

It won’t necessarily be only jetpacks, but other applications of such technology, such as “powered gliders, powered wingsuit, and powered parafoils,” Task and Purpose said. The report noted, however, that the U.S. military using Iron Man/Boba Fett-style jetpack setups is likely something that’s a long way off.

However, The Naval Institute said in a tweet last October that the British Royal Navy is also in the process of testing “Jet Suit assault teams,” which “could be used to rapidly swarm and board ships.” The same report said that the U.S. Special Forces Command was also “evaluating a jetpack that can reach speeds of more than 200 mph.”

There had been some reports about the U.S. military pursuing jetpack technologies going as far back as 2016. Back then, The Wall Street Journal reported that Jetpack Aviation, the Los Angeles-based jetpack company, was in talks with the special forces to develop a military jetpack and that the company had reached a “research and development agreement” with U.S. Special Operations Command, which futurism.com described as “a four-turbine jetpack that will lift twice the weight as current models, and require twice the fuel.”

“The smallest, fastest and safest way to transport paramedics, medevac the injured, move life-saving suppliers, and insert/extract personnel. When time counts, the Speeder will save lives. It will also be possible to fly a de-rated version recreationally,” the company said. “The Speeder can either be piloted or flown fully autonomously. It can transform from a pilot carrying craft to cargo craft in less than 10 minutes by sliding off the pilot seat and sliding on the cargo pod or litter basket.”