The Deal Is Not Enough: Why America Must Get More From Iran 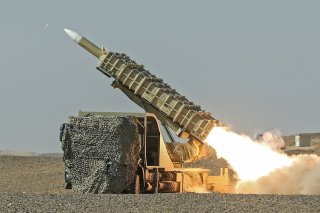 Ahead of this week’s talks in Vienna for the failing Iranian nuclear deal, Iran’s refusal last week to stop enriching uranium to 20 percent in return for sanctions relief is yet another signal that a return to 2015’s nuclear deal, the Joint Comprehensive Plan of Action (JCPOA), is both undesirable and unattainable.

Last Monday the Biden administration moved to revive talks over the JCPOA, by suggesting a gradual, negotiated reimplementation. The United States has already offered to ease some of the “maximum pressure” sanctions imposed under President Donald Trump, in return for Iran reversing key breaches of the deal—namely production of advanced centrifuges and uranium enrichment—moves that are viewed as crucial steps towards developing nuclear weapons.

Tehran however rebutted these advances via state media a day later, casting real doubt on their sincerity when purporting to want a return to the deal altogether—and the Vienna talks this week where the EU is set to mediate between the United States and Iran. The United States has again stated that it would be open to direct discussions, whilst Iranian Foreign Minister Mohammad Javad Zarif tweeted that this would be “unnecessary.”

The recent American overture is significant in that it has come soon after a period of deteriorating relations, even by the normally low standards. Whilst Biden’s election victory represented a potential de-escalation of tensions, he reiterated as recently as February that Iran would have to fully comply with the JCPOA’s restrictions before talks over returning to the deal could begin.

This position resulted in the subsequent fatal attacks on U.S. forces at coalition bases in Iraq in February and March, orchestrated by members of the Iranian Revolutionary Guard Corps controlled Popular Mobilization Front—a collection of Iranian-backed Iraqi Shia militias.

These attacks highlight two pertinent issues: That Iranian aggression is not currently being curtailed by the JCPOA, and indeed never was, and that Tehran has no real intent on conforming to a negotiated settlement to curb its now-widespread nuclear proliferation.

As officials head to Vienna this week to attempt to establish a “roadmap” back to the JCPOA’s commitments, it is evident that Iran failed to live up to the spirit of the original deal, regarding both its long-term nuclear ambitions, and its short-term interests fermenting regional instability.

Rather disappointingly, the best-case scenario for the U.S. team heading to Vienna, headed by National Security Adviser Jake Sullivan and U.S. Iran envoy Rob Malley, is to attempt to establish the sanctions relief that the United States will be prepared to offer in light of Iranian nuclear compliance—should that materialize. At present, there is no political appetite to discuss measures to either lengthen or strengthen the deal by removing the sunset clauses or curtailing Iran’s nefarious intercontinental ballistic missile (ICBM) program.

However, whilst the United States has repeatedly stated that Iran must first return to full compliance with its nuclear obligations before sanctions relief, and Iran has insisted on sanctions relief first, even this first step may prove impossible at this stage. China, a crucial actor in talks, sides with Iran over this issue.

A further obstacle is the upcoming Iranian presidential elections, scheduled for June. All the likely candidates are amongst the hawkish conservative hardliners, who take an especially critical view of the JCPOA. To that end, Washington is currently aiming to work within a two-month window to reinstate Iranian nuclear compliance, before the elections and the likely scenario of an even more hawkish Iranian regime.

Given the recent Iranian aggression against U.S. and coalition forces in an attempt to hasten Washington’s hand, and the limiting timescale that the U.S. negotiators are chasing for merely reinstating a severely flawed deal, a truly comprehensive deal is now required to replace it. The events of the past six years have shown that a narrow focus on Iran’s uranium production and enrichment capacity is insufficient.

The original deal relied upon the weakly worded and negligibly enforced UN Resolution 2231 to cover issues of ballistic missiles and arms proliferation. This proved a failure. Even in the period that the JCPOA was still being complied with, the Iranian government continued to develop ballistic missiles capable of carrying nuclear warheads and plastered them with slogans calling for the annihilation of Israel. A UN report in January 2018 found them in noncompliance with the arms embargo established by UN2231, yet no measures were taken.

More recently, these activities have escalated, with terrorist proxies launching brazen missile attacks on the Saudi Aramco oil processing facility in September 2019 and an Israeli tanker in February of this year, as just two examples of Iranian state-sponsored terrorism.

There’s also evidence, uncovered by the Israelis in April 2018, of the secret continuation of Iran’s nuclear weapons program after the JCPOA’s introduction. Further reports of this were revealed by Western intelligence officials in March.

As a result, any new deal needs to cover ballistic missiles, the destabilizing effect of Iran’s foreign policy in the Middle East, and provide a faster mechanism by which suspected nuclear sites can be inspected.

It also needs to scrap, or at the very least postpone, the controversial “sunset clauses” of the original deal that are already starting to expire. The UN arms embargo on Iran ended last year. In 2023 a ban on exporting missile technologies to the state also ends. The majority of the rest of the deal expires by 2031. The JCPOA was, therefore, at best only a stopgap, and now both the opportunity and necessity are there to implement something more permanent.

Over the course of the last six years, and the last three months, in particular, Iran has shown that when it comes to renegotiating the deal, they have no real intention of providing any credible solution to entering negotiations with the cooperative spirit in which they are designed. The flaws of the original JCPOA have been highlighted and thoroughly exploited. A new, more comprehensive deal is now urgently needed.

Robert Clark is a Defence Fellow at the Henry Jackson Society in London. Prior to this, he served in the British Army for thirteen years including tours of Iraq and Afghanistan.

Eric Robinson is a Research Assistant at the Henry Jackson Society.