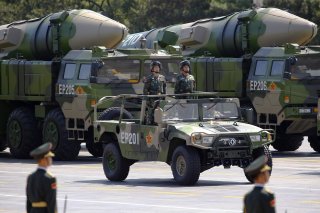 While most of the concern regarding China’s missile arsenal centers around the much-discussed “carrier killer” missiles purported to threaten the ability to attack and destroy aircraft carriers at ranges out to over 2,000 miles offshore, there are also commensurate and equally serious risks to U.S. bases, installations, and assets placed throughout the Pacific.

The Chinese DF-21D and DF-26 continue to get a lot of attention as tested operational weapons armed with various explosives and long-range precision guidance systems, as they comprise a large portion of the well-known effort to keep U.S. forces at bay through the all too familiar “anti-access/area-denial” strategy.

Alongside the known risk to U.S. carriers, these weapons and others like it the Chinese arsenal of ballistic missiles introduce new threat paradigms for the U.S. presence in Guam, South Korea, Japan, and Taiwan, given that they are within striking distance of one of these land-fired missiles.

The distance from Beijing, China to Tokyo, Japan, for instance, is listed as 1,304 miles, a distance well within the attack range of the DF-26’s 2,000-mile strike range (note: some sources have this as higher). This tactical threat scenario also applies to large numbers of crucial U.S. surveillance and strike platform assets based in Guam and the Korean Peninsula, a circumstance now likely informing the accelerated pace with which the U.S. military is prioritizing base defense weapons.

How to Protect U.S. Bases

There are a number of technical innovations and U.S. weapons systems now being massively accelerated, fast-tracked, and refined for warfare, all with a specific mind to countering Chinese missile threats against potentially vulnerable U.S. assets in the Pacific. The Navy routinely operates Triton drones, fighter aircraft, and various bomber platforms

The U.S. effort incorporates ongoing testing and development of new counter-drone weapons and technologies coupled with advanced forms of air-and-cruise missile defense in the form of radar, fire control, interceptors, and other kinds of countermeasures such as EW, cyber, or lasers.

“We need to be able to manage targets and track where we are at in terms of finding the targets and engaging, and communicate from the operational level down to the wing level,” Gen. Jeffrey Harrigian, Commander Europe and Africa told reporters recently at the 2021 Air Force Association Symposium when discussing the importance of base defense.

An ability to find, track and target multiple approaching enemy threats such as hypersonic weapons, cruise missile attacks or multiple incoming drones is being addressed through newer fire control and radar applications such as the Army’s Integrated Battle Command System (ICBS).

Advances in radar tracking technology, coupled with increasingly AI-enabled command and control technologies linking sensor data to shooters or “effectors” can network otherwise disparate nodes to one another to form a meshed or interwoven defense system. The IBCS program, which continues to progress, links technologies such as a ground-based Sentinel radar with a Patriot missile targeting technology or Terminal High Altitude Missile Defense (THAAD) system to one another to share real-time threat track data across large swaths of otherwise disconnected territory.

In one demonstration last year, the Army’s IBCS was able to successfully track and destroy two incoming maneuvering cruise missiles simultaneously, with a single Patriot radar. The Army has worked with the Air Force to test multi-domain IBCS connectivity as well, at one point linking threat tracking data between a surrogate ICBS system and airborne F-35.

It is precisely this kind of networking, coupled with a wide range of interceptors and countermeasures which will be needed to succeed in offering a substantial, credible defense of U.S. assets in the Pacific against Chinese missiles. Ideally, Navy surface ships, drones, aerial sensor nodes such as an F-35, satellites in space and interconnected ground radar systems could all instantly coordinate threat tracking information and perhaps even draw upon AI-enabled analytics to determine an optimal threat response.

Time for a U.S. Military Strategy to Stop China in the South China Sea