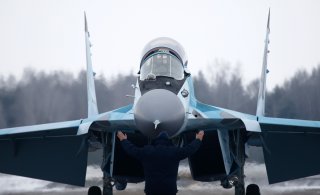 Anton Geraschenko, a senior Ukrainian official who is an adviser to the minister of internal affairs, suggested on Friday that the casualty toll from air base explosions in Crimea this week was substantially higher than previous estimates, according to the New York Times.

Geraschenko contended that as many as sixty pilots and technicians had been killed and a hundred people injured when a series of blasts rocked the Saki field on Crimea’s western Black Sea coast on Tuesday, adding that he came to that conclusion based on video evidence and intelligence data. Officials had previously said that at least one person had been killed and more than a dozen wounded.

Russian authorities stated that munitions stored at the site exploded but denied that any aircraft had been destroyed.

“Judging by the way the cars were damaged by the explosion, shrapnel and fire, there is no chance that any plane made of delicate, thin magnesium and aluminum alloy remained intact,” said Geraschenko, who dismissed the Russian account as a “blatant lie.”

A British military intelligence report released on Friday claimed that at least five fighter bombers and three multi-role jets had been “almost certainly destroyed or seriously damaged” in the blasts.

The official’s statements further contradict “a Russian account about damage at a site that has been a vital jumping-off point for Moscow’s military operations since its invasion of Ukraine began in late February,” the Times wrote.

“The explosions are all the more galling for Russia, because Crimea—which Moscow annexed in 2014—has largely escaped fighting since February and the base was far from any recognizable front line,” it continued.

“War is definitely not the time for vanity and loud statements,” he said. “The less concrete details you give about our defense plans, the better it will be for the implementation of those defense plans.”

On Thursday, Zelensky also expressed concern regarding a Russian-occupied nuclear power plant in southeastern Ukraine that has been the target of recent attacks, according to a CNN report.

“IAEA experts believe that there is no immediate threat to nuclear safety,” but “that could change at any moment,” Grossi said.

“Any military action jeopardizing nuclear safety, nuclear security, must stop immediately. These military actions near to such a large nuclear facility could lead to very serious consequences,” he continued.

Zelensky added that “only the complete withdrawal of Russians from the territory of the Zaporizhzhia NPP and the restoration of Ukraine's full control over the situation around the plant will guarantee the restoration of nuclear safety for all of Europe.”