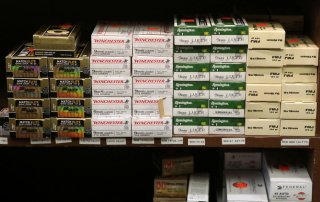 When the ammunition shortage around the United States began in early 2020, some worried that it would continue into 2022. It is now clear that those predictions were absolutely correct.

The latest news on the ammunition shortage comes from Mississippi. Local broadcaster WDAM notes that both hunters and stores are having trouble accessing ammunition during the height of hunting season.

“Right now is hunting season, deer season, and we don’t have hardly any deer shells. Whatever we do get in is gone within a few days at the most,” said Tyler Hancock, a worker at a local convenience store. Hancock went on to suggest that those who believe they will need ammo should stock up three months in advance.

T-Voe Trosclair, an employee at a local outdoors store, said that he’s seen up to a 40 percent increase in the price of ammunition.

“It affects us on a daily basis. General ammo, hunting ammo … is very hard to get. Some we have and some we just can’t find at all,” Trosclair told WDAM.

The head of the sheriff’s department, however, said that they have planned ahead and have enough ammo for their needs.

There are a number of factors behind the ammunition shortage. It's been attributed to a combination of the explosion in gun ownership since the start of the pandemic, supply chain disruptions, fears of new gun legislation, concerns over social unrest and rising crime, and the consolidation of the ammunition industry.

This has left gun owners struggling to find the ammunition they want and paying much more for ammunition when they can find it.

In the meantime, ammunition companies are producing ammunition at near-record rates. In 2020, manufacturers produced one billion more rounds than they did in 2017.

David Reeder of The Mag Life recently challenged the consensus about the shortage. Reeder noted that ammunition has become much more accessible and affordable over the past year.