Defender Europe 21: A Historic Milestone for the Western Balkans 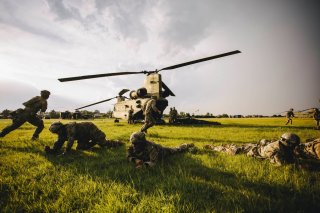 As part of Exercise Defender-Europe 21, military equipment will soon be rolling off U.S. Navy vessels into the Albanian port of Durres. Albania of all places, a country that until thirty or so years ago was viewed as the “North Korea of Europe,” will be participating in an event that would have been inconceivable just three decades ago. A clear sign of its stepping out and up and playing center-stage for one of the largest military exercises taking place in Europe. In all likelihood, an event of such strategic importance would likely not even have been imagined when Albania began its NATO integration process, nor when it officially became a NATO member in 2009.

Carrying the moniker Defender-Europe 21 to signify the year, this will be the second exercise in the Defender-Europe series. When the inaugural Defender-Europe 20 took place last year, it was the first time in recent decades that the United States and its NATO allies conducted a large-scale military exercise across the Atlantic and Europe. The last time was during the “Return of Forces to Germany” exercises series known as Reforger and designed to protect Europe during the Cold War.

Defender-Europe 21 is a very large-scale multinational military exercise led by United States Army Europe and Africa Command. It demonstrates the strong U.S. commitment to NATO and European security by bringing together a wide array of military elements and capabilities of the United States, NATO, and partner nations so they can exercise together and learn to perform better as one cohesive force. These exercises are designed to improve military readiness and offer professional development opportunities for the participating countries and their militaries.

The success of Defender-Europe 20, despite some modifications because of the Covid-19 pandemic, demonstrated the strength and durability of transatlantic relations, tested essential procedures and skillsets, emphasized unified purpose, and incentivized allies to strengthen their institutional knowledge and improve their logistical capacity.

A defensive exercise in nature, Defender-Europe 21 is designed to build and exercise collective readiness to respond to threats. It will focus on crisis response scenarios and practice integrating and carrying out the efforts of the very different military services of the various armies, air forces, and navies. What makes it even more challenging is the complex nature of coordinating the activities of more than 28,000 multinational forces from twenty-six nations, not only during the exercises, but as they move through countries towards the thirty training areas located in the twelve countries participating.

This year, the exercise will be associated with two other key training events. The first, African Lion, is the U.S. Africa Command’s premier annual training event which includes nearly 5,000 military personnel from approximately twenty-four nations. The second is Steadfast Defender, a new series of NATO exercises focused on the transatlantic reinforcement of Europe to demonstrate NATO’s ability to respond rapidly to a full spectrum of threats.

Albania’s role in this year’s exercise will be significant with the Albanian military’s comprehensive integration into the exercise. This marks a major step up for Albania and demonstrates the confidence that exercise planners have placed in its military. By hosting near-simultaneous missile defense exercises timed with activities in twelve other countries and conducting other exercise-related activities there will be a lot of activity. The port of Durres will be Defender-Europe 21’s only exercise site where a Joint Logistics over-the-shore operation will take place. This exercise involves moving military equipment from a ship to the shore.

Defender-Europe 21 emphasizes the geostrategic importance of the Western Balkans. Gen. Christopher Cavoli, the Commanding General of the U.S. Army Europe and Africa, has emphasized the importance of the region: “Defender-Europe 21 provides us the best opportunity to hone our abilities alongside our allies and partners in the strategically important Balkans and Black Sea region so that collectively, we are ready to respond to any crisis that may arise.”

The connection between Defender-Europe 21 and NATO must also be viewed for what it means for new NATO members in the Balkans as well as the aspirant countries. Upon reflection, it was only as recently as 2009 that Albania and Croatia became members of NATO, followed by Montenegro in 2017, and North Macedonia in 2020. NATO, as a pillar of both stability and transformation in a region that still has many pockets of uncertainty, is critical and provides the umbrella of stability and security and supports the goal of “a Europe whole and free and at peace.” The United States in this regard deserves special recognition in the Western Balkans for being steadfast in its efforts of bringing stability and security to the region and emphasizing the importance of democratic reforms and economic development.

In the last seventy-two years, NATO has been the most powerful and successful alliance in history—the essential forum for transatlantic security that provides security for approximately one billion people in the transatlantic community. Today, we have entered a new era of great power competition which has brought about a number of new challenges. The current geopolitical climate makes it even more compelling for NATO and the transatlantic community to work together to set clear priorities. The keys to success lie in understanding and managing new challenges and demonstrating a clear commitment to the defense and security of the alliance, with a special focus on transatlantic resilience and unity.

The level of attention and hard work that the new NATO members in Eastern Europe have made towards fulfilling their NATO commitments has paid off. However, not only is there more to be done, but the effort must be recognized as an enduring commitment. The report of the Reflection Group “NATO 2030: United for a New Era” lays out precisely the complex and critical challenges confronting the transatlantic community in this decade. The threats are real and range from Russia’s destabilizing behavior, the security implications of China’s aggressive and coercive behavior, terrorism, cyber-attacks, disruptive technologies, the security implications of climate change, and health pandemics. All these issues present challenges to our shared interests, our democracies, our way of life, and ultimately to the rules-based international order.

Appreciating the importance of Defender-Europe 21 is a huge opportunity for the countries in the Western Balkans. This is an extremely important exercise for the new NATO members, and a huge opportunity for these countries to show their commitment to the alliance. The large-scale movement of troops and equipment involved in this exercise requires significant support from all of the partner nations. Leadership commitment in this regard is essential because exercises like Defender-Europe 21 improve military readiness, build core competencies, and establish organizations’ resilience. Albania and the other countries of the region have a significant role in ensuring the success of Defender-Europe 21 with each success serving to build momentum for future collaboration in this area. This is a unique opportunity for Western Balkans countries to demonstrate that they can play their part in the transatlantic relationship, and contribute accordingly. The important takeaway is that watching the game is very different from learning the rules and gaining the skills to play the game. This is a prerequisite to joining the team.

Creating the necessary conditions for a successful Defender-Europe 21 clearly goes well beyond the military domain. It requires strong civil-military cooperation and a whole-of-society approach that includes the active engagement of the commercial sector, civil society, and media. In this regard, exercising all aspects of civil society in support of a national security exercise will prove to be a winning formula for everyone.

Joseph Vann is a professor of national security studies at the George C. Marshall European Center for Security Studies.