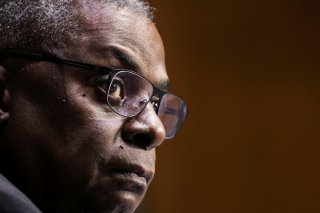 Massive investment in innovation and new technology greatly strengthened cooperation with European and Pacific allies, and a new dispersed, yet highly networked force are all fundamental elements of the Pentagon’s new “Integrated Deterrence” approach.

The concept was introduced by Defense Secretary Lloyd Austin during public remarks at the Global Emerging Technology Summit of The National Security Commission on Artificial Intelligence. He explained that new levels of deterrence could be reached through the combined strength of the United States and its many allies, a vigorous commitment to research and development funding, and sustained technological superiority.

“Integrated deterrence is about using the right mix of technology, operational concepts, and capabilities—all woven together in a networked way that is so credible, and flexible, and formidable that it will give any adversary pause,” Austin said according to a Pentagon transcript.

Instead of relying upon pure numbers or force size to achieve military overmatch against potential adversaries, Austin’s “Integrated Deterrence” strategy points to the wide-spanning impact of innovation, dispersed, yet secure networking, and technological superiority.

The integration focus of the strategy is clearly invested in the need for multi-domain operations and joint U.S.-allied war preparation exercises. If the U.S. military truly strengthens its clear margin of technological superiority and of course solidifies its connection to allies, then it could lead to a potentially effective deterrence strategy.

A more dispersed, multi-domain force able to successfully network with allies can exponentially increase the size and speed of its striking power. Longer ranges can also help cultivate new tactical and strategic approaches to align with how weapons might be used differently in a modern or future warfare environment. Much of the success of this would, it seems, depend upon the measure of secure networking and connectivity made possible through hardened data links, artificial-intelligence-enabled computing and high-speed data processing. The concept is to look collectively to a degree, meaning it might make more sense to envision a coordinated, multinational military operation benefitting from both the unique attributes of a given countries’ weapons system and an ability to cross-train, collaborate and secure information sharing in real-time in war.

Integrated Deterrence “means investing in cutting-edge capabilities for the future, in all domains of potential conflict,” Austin said.

“America’s integrated deterrence relies on both innovation and investment,” he added. “And we understand that those are interwoven. Innovation requires the resources to develop new ideas and scale them appropriately.”