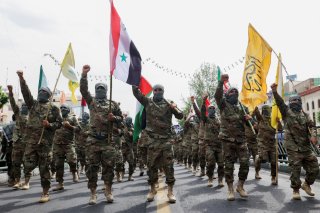 The Vienna talks aimed at reviving the 2015 nuclear deal with the Islamic Republic of Iran are at a stalemate due to the United States’ refusal to lift the terrorist designation of the Islamic Revolutionary Guards Corps (IRGC). The families of the American victims of Tehran-sponsored terrorism have been urging President Joe Biden to reject the request. But they are not the only ones concerned about this murderous organization, which has terrorized innocent civilians around the world for over four decades. Vulnerable minority communities in the Middle East—those representing diverse faith, ethnic, gender, and sexual orientation populations that have been systematically brutalized by the Islamic Republic—are also watching closely to see whether the IRGC, their long-time tormentor, will be delisted as a terrorist organization.

The United States has in its legal arsenal one of the most effective tools in the world to go after the IRGC’s operatives and assets, thereby crippling its mission to take innocent lives. Washington’s Foreign Terrorist Organization (FTO) and Specially Designated Terrorist (SDGT) designations offer not only opportunities for criminal prosecutions, assets freezes, and visa and admission bans, but also provisions for victims to sue for civil damages. Moreover, the ability to apply extraterritorial punitive measures allows the West to wage a global hunt for the IRGC’s militants and terror infrastructure. Western sanctions imposed following Russia’s invasion of Ukraine have once again shown the importance of a robust sanctions regime for pushing back against rogue state actors.

Concerns held by the Middle East’s most vulnerable communities about potential sanctions relief for the IRGC were central to a statement that the Anti-Defamation League’s (ADL) Task Force on Middle East Minorities issued last week. The task force, which I have the privilege of co-chairing, brings together preeminent experts on and advocates for the Middle East’s vulnerable communities. Task force members echoed many other experts and advocates around the world in calling for the U.S. government to keep the IRGC’s terrorist designation. One of the task force members warned, “Removing the IRGC from the foreign terrorist designation would be a slap in the face of the hundreds of thousands of innocent victims, from Iranian minorities to innocents across the region, from Israel to Iraq, Lebanon to Yemen, and so many more.”

For the Islamic Republic, the IRGC is as potent a weapon as a nuclear arsenal in intimidating those targeted by the regime. Iranian foreign minister Hossein Amir-Abdollahian said in March that the IRGC sanctions constitute a “red line” for the Vienna talks. Tehran’s unwavering commitment to the IRGC, which Ayatollah Khomeini once endorsed by saying, “I wish I was in the IRGC,” should come as no surprise.

The United States and its allies should be as committed to holding Tehran’s terrorist arm accountable as the Islamic Republic is committed to rehabilitating it. In March, ADL CEO Jonathan Greenblatt called for a “zero-tolerance policy on terror” in opposing the delisting of IRGC. He asked, “What is the justification for removing the penalties on individuals whose hands are soaked in blood, such as Mohsen Rezeai who masterminded the 1994 AMIA bombing that murdered 85 people and injured hundreds in Buenos Aries, Argentina?”

It is reassuring to hear U.S. officials call out the IRGC for what it is. When NBC’s Andrea Mitchell asked Secretary of State Anthony Blinken during an interview last month whether the IRGC is a terrorist organization, he replied, “they are.” Two weeks later, during a press briefing, State Department spokesperson Ned Price appeared to reject Tehran’s demand to delist the IRGC for a return to the nuclear deal, calling out the Islamic Republic as “the world’s leading state sponsor of terrorism.” Price added, “We will use every appropriate tool to confront the IRGC’s destabilizing role in the region including working closely with our partners in Israel.”

But as families of the IRGC’s victims in the United States and the Middle East have repeatedly emphasized, statements alone won’t hold the IRGC accountable. Keeping sanctions in place and ensuring their strict implementation is key to deterrence. Removing the IRGC from either the FTO or SDGT lists would undermine the integrity of American sanctions by weakening the ability of the U.S. government, as well as victims of terrorism, to go after Tehran’s murderous arm through the courts of law.

The IRGC is committed to a genocidal campaign against Jews—as reflected in former Iranian president Mahmoud Ahmadinejad’s vow that Israel must be “wiped off the map.”—but it also seeks to persecute others. Over the years, Muslims of various denominations, as well as Baha’is, have also been victims of massacres carried out by the IRGC and its affiliates in the Middle East. In 2016, United Nations officials accused an IRGC-affiliated militia of executing at least eighty-two civilian members of the disenfranchised Sunni Arab community in Syria’s eastern Aleppo. IRGC-backed Shiite militias have also been repeatedly implicated in reprisal killings of scores of Sunni Arabs in Iraq. Moreover, the IRGC-backed Houthi militia has targeted Baha’is in Yemen, and a prominent Houthi strategist declared, “We will butcher every Baha’i.” The IRGC remains indiscriminate in its targeting of the Middle East’s at-risk communities.

This is why ADL’s Task Force on Middle East Minorities, bringing experts and advocates from different faiths, ethnicities, and politics, stands united in its call for keeping terrorist designations in place on the IRGC and its entities and operatives. In an increasingly polarized world, the noteworthy consensus across the political spectrum in the Middle East and the United States when it comes to the IRGC’s continued designation should be taken as a sign of the worldwide commitment to hold the IRGC accountable. Going forward, the Vienna talks should take that global sentiment into account, and other governments should follow America’s lead in designating the IRGC for what it is—a ruthless terrorist entity.