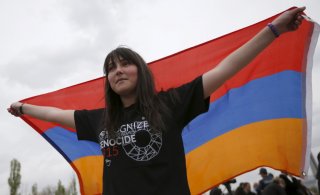 Armenia is currently battling for its sovereignty and to establish itself as a democracy in the South Caucasus. Its success on these fronts will ensure the long-term viability of economic deals with Western countries within the region. But in order to achieve this, the West needs to provide political and economic support. I often voice the idea of foreign investments in the space industry in Armenia, which used to be a tax-free zone for such activities. This is just one possibility for international cooperation which would strengthen Armenia’s sovereignty, and thereby democracy in the country and mitigate regional tensions.

Notably, Armenia and its Western partners seem to be on the same wavelength when it comes to the idea of supporting Armenia as a single ''soldier'' of democracy. President Joe Biden’s invitation to Prime Minister Nikol Pashinyan to participate in the Summit of Democracy suggests that the efforts and sufferings of the Armenian people in the pursuit of democracy are worth supporting. There has also been quite intensive work within the frameworks of the Organization for Security and Cooperation in Europe (OSCE) Minsk Group on the Nagorno-Karabakh conflict. Other European countries also are raising Armenian issues, in particular related to the recognition of the Armenian genocide, highlighting their understanding of the Republic of Armenia as a subject of international relations. But more needs to be done to secure Armenia's democratic future.

Although Armenia’s electoral traditions began with its independence in 1991 with the collapse of the Soviet Union, the real history of the country’s democratic transitions starts with the Velvet Revolution in 2018. Since then, Armenia has been traveling the painful path of strengthening democracy. However, it has to contend with the thirty-year-old Azerbaijani dictatorship on its eastern border, as well as its own history of authoritarianism and the numerous geopolitical constraints that pose obstacles for democratic integration.

No discussion of democracy-building in Armenia, or in any other post-Soviet country, can take place without mentioning Russia. The Armenian people initiated a democratic revolution in 2018 in order to reject the decade-long rule of Serzh Sargsyan and his repeated legal concessions to the Russian Federation. For years, Armenia’s puppet leaders engaged in criminal deals with Russia that involved compromising Armenia’s sovereignty and state capacities to stay in power. Under pressure from Moscow, Yerevan was forced to join the Eurasian Economic Union (EAEU) and Collective Security Treaty Organization (CSTO) together with other countries that struggle democratically. This continuous trade strengthened Russia’s dominance inside and outside of Armenia, constraining Armenia’s sovereignty to the point that the Armenian people had to take to the streets to change the realities around justice, constitutional order, sovereign decisions, and democracy.

Democratic reforms in Armenia are closely connected with its security challenges, especially the unresolved conflict over Nagorno-Karabakh. Despite heavy pressure, Yerevan still stands determined to fulfill its democratic ambitions. However, there are several external and domestic constraints that must first be addressed.

Because of the unresolved conflict in Nagorno-Karabakh, and the security dilemma posed by its membership in the CSTO, Armenia has fewer opportunities to diversify its foreign policy. Armenia’s security and economic partners are deeply authoritarian countries with repressive regimes and have no incentive to support Armenia in its implementation of democratic reforms. Moreover, they identify a democratic Armenia as a threat, as the spread of such democratic movements might damage their grip on power. Thus, Yerevan is in a difficult situation when it comes to strengthening and widening its political objectives with the democratic world.

Armenia’s prospects for stronger democracy and inclusive development are deeply interconnected. When it comes to the latter, the Armenian space industry has much to offer, including tax incentives, human capital, and a history of scientific traditions, all of which could make Armenia a hub of space studies and manufacturing. This can bolster the local economy, tech sector, and STEM education while overcoming the challenges of brain drain, unemployment, technological adoption, overall development, and human security. By strengthening Armenia’s capacities domestically, the West can help Armenia defend its sovereignty and strengthen democracy. But it also has major regional implications that will foster a regional balance of power, stability in security affairs, and long-term peace.

In the end, Armenians stand strong in their commitment to democracy and have a great hope that democratic civilizations will come together to support their efforts Although the geopolitical attractiveness of cooperating with authoritarians may be tempting, the democratic world is aware of how things go when investing in authoritarian regimes, such as in the case of Belarus. The absence of democracy, in this case, and always, makes countries less reliable and less predictable, whereas democracies can be counted upon for long-term partnership. Armenia is striving for the second.

Lusine Hakobyan is a member of the Political Council Rally for the Republic Party in Armenia.