The Department of Defense is Testing this Airborne Cargo Glider 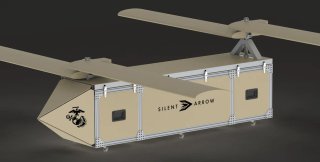 The Department of Defense awarded Silent Arrow, a company with a novel idea for resupplying troops in the field, with a twelve-month contract to experiment with the company’s autonomous gliders. The tests will also occur in tandem with a Special Operations Command exercise scheduled for later in 2022.

“We'd like to thank the Joint Chiefs and J7 for their confidence in awarding this seminal program,” Silent Arrow Founder and CEO Chip Yates said in the release. “We are looking forward to leaning in with our mission partners and delivering these disruptive capabilities to the warfighter to create a logistical advantage while reducing physical threats to those operating in harm's way.”

The contract comes on the heels of an exercise by an unnamed American ally in the Middle East that saw the company’s unpowered gliders launched from the back of a C-130 cargo plane, marking the glider’s first operational deployment.

Two GD-2000s, Silent Arrow’s flagship glider, delivered more than 1,000 pounds of cargo during that exercise, each autonomously over a “desert environment.” Each GD-2000 can transport about 1,600 pounds of cargo inside its cubical stowage area.

A Silent Arrow promotional video demonstrates how the GD-2000 works. In the video, one of the company’s products is launched from the back of a transport airplane. The glider’s wings pop out and deploy soon after, guiding the GD-2000 to the ground delivering its cargo.

Because the gliders are unpowered, they create very little noise during flight. The GD-2000 has a range of about forty miles when dropped from an altitude of 25,000 feet. When dropped from a helicopter at an unspecified altitude, that range drops to about fifteen miles.

Silent Arrow also offers a version powered by a small electric motor that can take off and land from improvised airstrips.

Though not as glamorous as powered flight, resupply via glider could provide an attractive alternative to conventional resupply over combat zones by parachute. A relatively long forty-mile stand-off capability could keep resupply pilots out of harm’s way and deliver supplies to troops more accurately.