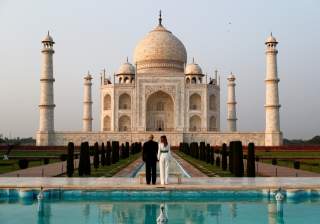 Air Force One has touched down in India, thus commencing U.S. President Donald Trump’s first state visit to India. As Jeff Smith of the Heritage Foundation writes, for Washington, New Delhi continues to be a democratic lynchpin for the U.S. agenda in the Indo-Pacific.

On the president’s agenda will be meetings with Prime Minister Narendra Modi and Indian President Ram Nath Kovind. President Trump and the First Lady, Melania Trump (accompanied by daughter Ivanka Trump and son-in-law Jared Kushner) will also travel to the Taj Mahal in Agra and to a grand reception in Ahmedabad.

The optimism around the visit was earlier centered around an impending trade deal between the United States and India, a much-touted deal which didn’t come to fruition last September at the sidelines of the UNGA 2019 week.

The omens did not look good with U.S. Trade Representative Robert Lighthizer canceling a scheduled visit to India, just weeks before the president’s.

However, Washington is increasingly interested in working out agreements on agricultural products and medical devices.

Both countries have been going back to the drawing board and trying to work out a trade deal in the last twelve months. But Trump himself signaled a day earlier that no such deal would be hammered out during his present visit.

The president himself stated, that “I’m really saving the big deal for later on. I don’t know if it will be done before the election, but we’ll have a very big deal with India.”

TRADE AS IT STANDS

The current trade relationship between the United States and India stands at $160 billion, and the goal is for it to grow to as much as $500 billion in the near future. Last year, the United States had a $23.2 billion goods trade deficit in 2019 with India, its ninth-largest trading partner in goods.

Both countries have been engaged in a tit for tat tariff war over the past year. India was hit hard by Trump’s aluminum and steel tariffs. New Delhi slapped tariffs on twenty-eight U.S. products including Harley-Davidson motorcycles and U.S.-grown apples, after Washington withdrew its long-standing preferential status-the General System of Preferences (GSP) in June 2019. By doing so, India was precluded from exemption of billions of dollars’ worth of U.S. taxes and levies. India in a retaliatory measure to the withdrawn GSP benefits slapped fresh tariffs on U.S. products in its new 2020 budget.

Trump has made trade and trade deals the hallmark of his presidency and has called India the “tariff king.”

American manufacturers have been hit hard by heavy tariffs from India, which have imposed an exorbitant duty on their products. Under the current circumstance, there is little to no maneuver room for a trade deal to take place. President Trump himself indicated it would take place, but sometime in the future

Trump has eschewed from multilateral trade deals such as the Trans-Pacific Partnership, an Obama-era hallmark and trade deals such as NAFTA. Being the transactional businessman that he is, Trump prefers bilateral deals. The American chagrin with India has always been what they perceive as a largely protectionist state. India’s economy is driven by large domestic demand and in the GOP imagination, this is a cardinal sin to a large market waiting to be tapped into by American businesses.

Despite being a pro-business prime minister and having won a large mandate in 2019, Modi and his government face challenges of a slowing economy. The International Monetary Fund (IMF) slashed its estimate of India’s growth rate to 4.8 percent, down from 6.1 percent. Global credit rating agency India may have improved its ranking in the World Bank’s ease of doing business index, but challenges still remain.

However, in Washington, the American appetite for India’s economy remains strong. There remains a strong sense of investor enthusiasm, despite the slump in economic growth rates. Investors remain bullish across various sectors. For the Republican establishment, India has always been a strong economic, democratic counterweight to China.

While India and the United States are not allies, they continue to remain strong strategic partners. Since the Cold War ended, India has diversified its weapons and military portfolio. India is no longer just dependent on sales from Russia, but imports from Russia, the United States, France and Israel and thus in doing so, U.S. defense sales have greatly increased.

India is set to buy over $2.4 billion worth of Lockheed Martin helicopters and more defense deals could be in the offing.

THE ELEPHANT IN THE ROOM IS THE DRAGON

The pivot to India from Washington is twofold. On one hand, it is the thawing of Cold War era tensions when India shared a close bonhomie with the Soviet Union. The second being the China factor. Washington has long viewed New Delhi as a democratic counterweight to Beijing.

President Trump and his team are also expected to raise their trepidation of Huawei and 5G technology. India has allowed Huawei to participate in 5G test trials, however no final decision has been made.

India and the United States have also coalesced on their concerns vis-à-vis China and the Belt and Road Initiative (BRI), cross border terrorism, a Free and Open Indo-Pacific, and the Quad.

Superficially, there have been many analogies drawn between Prime Minister Modi and President Trump. While there is very little substance in those similarities, there is, however, a mutual affinity that they both share for large audiences and at times, commentators have called it grandstanding.

The star-studded Howdy Modi spectacle in Houston took place in the NRG stadium, a football arena in Houston. If football (American football) is sacrosanct to American culture, only fitting that President Trump be welcomed to a rousing reception in the soon to be world’s largest cricket stadium in Ahmedabad.

The visit is seen as largely symbolic as a photo opportunity for both leaders who have suffered domestic pushback. President Trump with the impeachment hearings while Prime Minister Modi with the anti-CAA/NRC protests.

President Trump also heads into an election year and will try and court the Indian diaspora back in the United States who have traditionally voted Democrat. Meanwhile, photo opportunities of Modi with the most powerful person in the world will be useful for his image at home. The optics will be good for both leaders as each will seek political benefit from domestic constituencies.

While India and the United States have increased their strategic partnership in the last decade, there have been no high profile agreements since the landmark nuclear accord between George W. Bush presidency and Dr. Manmohan Singh’s government. Relations were cordial during the eight years of the Barack Obama presidency, including a visit by Obama in January 2015 as the guest of honor at India’s Republic Day celebrations, thus making him the only sitting president to visit India twice during his presidency. Prime Minister Modi, too, addressed a joint session of the U.S. Congress in June 2016. But symbolic bonhomie aside, the only ink that has flowed has been from journalists and not from policymakers, meaning no iconic agreement has been announced.