Did the Air Force Just Show off the RQ-180 'Stealth' Drone? 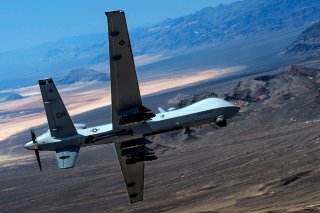 A recent video released by the Air Force Profession of Arms Center of Excellence might shed some light on one of the flying branch’s most mysterious and least-known new airframes. The tentatively named RQ-180.

Little is known about the airframe. It is known from a few photographs taken during spotting around the globe. One photo, apparently taken while the aircraft was at high altitude somewhere near the Philippines, is grainy and reveals only the airframe’s general outline. Another photograph is broadly similar, taken while the aircraft was in flight near Edwards Air Force Base in California, and reveals little besides the RQ-180’s general shape.

The aircraft in the Air Force video is broadly similar to the design seen in California and the Philippines. Both are flying wing designs (aircraft that lack a tail and are essentially just a wing. the B-2 Spirit is the prototypical example). However, the airframe in the Air Force video appears to be more of a semi-cranked design featuring a more pointed nose section and higher wing sweep angle.

It does, however, retain what are thought to be two engines buried in the RQ-180’s fuselage, as seen in the high-altitude photographs. Unlike wing-mounted commercial airline engines, engines mounted inside an aircraft’s fuselage have a very stealthy potential, as their turbine fane blades—a significant source of radar bounce-back—are hidden.

The RQ-180 has a nickname at Edwards Air Force Base: Great White Bat, or Shikaka, referring to a white bat from the comedy movie Ace Ventura 2, according to Aviation Weekly.

Though very little is known about the RQ-180 definitively, it is speculated that the airframe could fly sorties in tandem with manned fighter jets and act as the pilot’s eyes and ears. In addition, given the unmanned aircraft’s presumably very stealthy nature, it could, in theory, enter contested airspace in place of a manned aircraft and relay information about air or ground threats to a pilot.

The flying wing shape offers significant stealth advantages. So it’s little wonder that the design has proliferated since the conception of the B-2 Spirit stealth bomber: the United States has several unmanned flying wing plans in the pipeline as well as the B-2 successor, which is also a flying wing design. And it is not just the United States — Russia and China are both making progress in stealthy flying wing aircraft too.