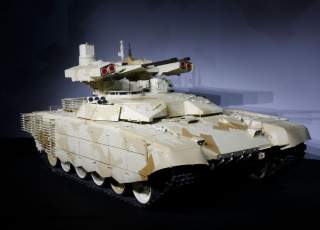 Key point: Beijing is known for copying foreign weapons and reverse-engineering them. It appears that China's "new" QN-506 armored vehicle shows Beijing is still at it.

Take the weapons on Russia's "Terminator" tank, stick them on a Chinese tank that first clanked out of the factory when Khrushchev was in the Kremlin and Castro captured Havana, and you have China’s newest armored vehicle.

The QN-506, recently unveiled at a Chinese defense trade show, appears to be a Sinicized version of Russia's BMPT-72 Terminator. Neither vehicle is a main battle tank like an M1 Abrams or T-80. Instead, they are “combat support vehicles,” which are essentially tanks armed with small-caliber cannon and missiles to support regular tanks, especially in urban warfare.

Russia’s BMPT-72 is, as the name suggests, based on the heavily armored chassis of the 1970s T-72 main battle tank. Its insectoid-looking turret features two thirty-millimeter rapid-fire cannons, four launchers for laser-guided Ataka-T anti-tank missiles and a machine gun.

The QN-506, manufactured by Wuhan Guide Infrared Co., Ltd., is based on the venerable Type 59, first fielded in 1959 as China’s legally licensed copy of the Soviet T-54 main battle tank. But the T-59’s turret is replaced by a new turret that turns the QN-506 into a mobile arsenal: a thirty-millimeter cannon, four anti-tank missile launchers, four launchers for loitering missiles, twenty small guided rockets, and even a drone that can scout ahead out to ten kilometers (six miles), according to the manufacturer's description posted on Web site Army Recognition.

The thirty-millimeter cannon can engage ground and air targets out to two thousand meters [1.2 miles], while the anti-tank missiles can destroy armored vehicles out to a range of four kilometers [2.5 miles]. Like the BMPT-72, the turret is remotely operated, with the two-man crew safely nestled in the armored hull. The QN-506 has the customary array of sensors, including a laser range finder, day/night camera, thermal imager and panoramic sight.

China has apparently taken a page from Russia, which in turn had learned the hard way that bad things happen to unsupported tanks that fight in cities. This was forcefully demonstrated during Russia’s assault on the city of Grozny in 1999, when Russian armored columns advancing through the streets were wiped out by Chechen rebels who fired anti-tank weapons from the cover of buildings. From this debacle came the BMPT-72 combat support tank: armed with small automatic cannon, it can support regular tanks by hosing down enemy infantry in buildings. Or, it can act as a tank destroyer by using its anti-tank missiles to engage hostile armor. This frees up the regular tanks, like the T-72 and T-80, to focus on other missions rather than engage in a costly close-quarters urban brawl.

Or, at least that’s the theory. The counter-argument is that tanks, even if transformed into missile-armed support vehicles, are big, heavy beasts that require considerable maintenance and logistics. So if you're going to bear those expenses, you might as well buy a modern tank with heavy armor and a full-sized cannon that can survive on the battlefield, rather than an upgraded sixty-year-old tank that can’t.

Still, the QN-506 concept resembles how arming old jet fighters with the latest missiles and sensors restores them as lethal platforms. The T-59 may be a Cold War relic, but China built ten thousand of them, with several nations—including China and North Korea—still operating them. Equipped with advanced weapons and sensors, the QN-506 proves there's still life in an old tank.