Did China's Missiles Kill the INF Treaty with Russia? The Experts Don't Agree. 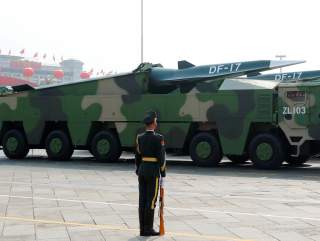 China’s lead over the United States in the field of super-fast missiles is one reason why Washington was wise to withdraw from a key arms-control treaty, one American expert argued.

Another expert rebutted that claim.

The DF-17 hypersonic glide vehicle, or HGV, made its public debut on Oct. 1, 2019 as part of the sprawling, 15,000-person military parade in Beijing commemorating the 70th anniversary of the founding of the People’s Republic of China.

While other countries also are working on hypersonic weapons -- meaning powered or gliding precision-guided munitions that can travel faster than five times the speed of sound --  the DF-17 could be the first hypersonic glide vehicle in the regular inventory of any military. HGVs in theory can carry conventional or nuclear payloads.

“Beijing’s massive missile buildup underscores a major reason why the Trump administration was right to withdraw from the 1987 Intermediate-Range Nuclear Forces Treaty: to free Washington to deter aggression with missiles of its own,” Andrew Erickson, a professor at the U.S. Naval War College in Rhode Island, wrote for The National Interest.

“It’s common sense that an agreement can’t work if only one party honors it,” Erickson pointed out. “Unfortunately, that’s precisely what unraveled INF. In formally withdrawing on Aug. 2, 2019, Washington bluntly acknowledged that this increasingly antiquated accord had no future.”

First, the treaty’s sole cosignatory, Moscow, had been flouting INF rules for years. Pres. [Barack] Obama himself considered terminating it for precisely that reason.

Yet Beijing wouldn’t join INF—the one way the treaty might have been rejuvenated. It still won’t. And China increasingly threatens the U.S. and its allies and partners, as well as regional peace and norms, with a robust missile-centric arsenal. It’s not the INF’s demise itself that should be lamented, therefore, but rather the Russo-Chinese actions that precipitated it.

Exiting INF is no panacea, but it opens much-needed possibilities for resetting the military balance and calculus in the Asia-Pacific. There, Chinese missiles pose a significant threat to U.S. and regional security. Freed from the constraints of the INF, the U.S. should take the opportunity to develop and deploy its own missiles to counter that threat.

But China’s missile arsenal doesn’t justify a wide rollback of U.S.-Russian arms-control, argued Gregory Kulacki, a China expert at the Union of Concerned Scientists in Massachusetts.

“The U.S. nuclear arsenal is more than 10 times larger than China’s and Chinese military strategists already believe the United States possesses conventional military superiority,” Kulacki explained. “So, scrapping the INF threatens to upset the balance of nuclear forces with Russia in Europe in order to widen an already large U.S. nuclear advantage over China in Asia.”

Since that’s an obviously bad trade, U.S. analysts and officials who tie the fate of this decades-old U.S.-Russia nuclear arms control agreement to China may be more worried about balance of conventional forces.

China’s missiles might be impressive. But they’re not so impressive as to justify an arms race, Kulacki wrote. “In China’s most recent assessment, U.S. conventional military capabilities in Asia are consistently described as far superior to the capabilities of China’s People’s Liberation Army.”

The INF treaty is a bilateral agreement between the United States and Russia intended to do one thing and one thing only: preserve nuclear stability between the two nations that account for more than 90 percent of all the nuclear weapons in the world. U.S. concerns about Russian violations of the treaty may be legitimate.

But China does not possess any constellation of nuclear weapons that threatens to upset the balance of nuclear forces in Asia, which is very heavily weighted in favor of the United States and will continue to be for the indefinite future, despite China’s nuclear weapons modernization program.

Withdrawing from the INF treaty and forgoing the preservation of nuclear stability with Russia because of concerns about improvements in China’s conventional military capabilities is unwarranted, especially since Chinese military professionals believe they still lag far behind.