Did India Purposely Fire a BrahMos Missile at Pakistan? 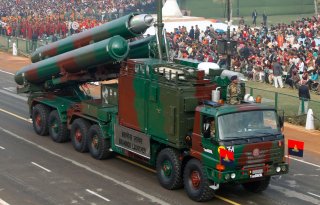 On March 10, 2022, Pakistan’s military spokesperson Maj. General Babar Iftikhar announced that on March 9, the Pakistan Air Force tracked a “high speed object” that traveled from India 80 miles into Pakistani territory before landing in Mian Channu, Pakistan. Thankfully, there were no casualties on the Pakistani side. And, to its credit, despite tracking the object since its launch from India and until it detonated in Pakistani territory, Pakistan did not exercise its right to retaliate in self-defense. The seven minutes flight time of the missile—from its launch in India to its detonation in Pakistan—could have led to cataclysmic consequences for a world already burdened by several armed conflicts.

This Indian “high speed object” wasn’t a stray drone or a fallen satellite—it was reportedly India’s much-touted BrahMos nuclear-capable missile. Two days after Pakistan military’s announcement, India’s Ministry of External Affairs (MEA) admitted that, “in the course of a routine maintenance, a technical malfunction led to the accidental firing of a missile” and claimed to have “ordered a high level enquiry.” To date, India has not confirmed whether the missile was the nuclear-capable Brahmos or explained how a “technical malfunction” could have caused an accidental launch. Pakistan has asked for a joint probe into the incident.

On the face of it, India’s explanation seems aimed at placating international concerns about the safety of its missile arsenal. This explanation shouldn’t suffice if the world is serious at probing what caused an “accidental” missile to launch by a nuclear power—something that could have brought two nuclear-armed neighbors to the brink of a dangerous war. As noted by Christopher Clary, “last week’s episode may be the first inadvertent launch of a cruise or ballistic missile by one nuclear power unto the territory of another nuclear power.”

What is more alarming—and makes the waters murkier—is India’s Defense Minister Rajnath Singh’s statement on March 15 before India’s parliament. Surprisingly, he omitted the Indian MEA’s earlier reference to the missile’s “technical malfunction” in the course of “routine maintenance” and instead said that Indian military’s standard operating procedures “though unmatched and of high calibre, would be revised – if needed – following the ensuing Court of Inquiry (CoI) into the incident.” As reported by Rahul Bedi, some defense analysts have interpreted this to indicate that the government is suggesting that this was due to “human error.”

And there are good reasons why India would like to pin the missile launch on “human error.” In January, India inked a $ 375 million deal with the Philippines for the supply of the BrahMos missile—India’s prized weapon jointly manufactured with Russia. India’s obfuscation from first calling the missile launch a “technical malfunction” and later implying it could have been a “human error” is purportedly to avoid the BrahMos being categorized as a faulty weapons system—something that can deter potential sovereign buyers of the weapon system.

The Indian missile launch calls into question India’s reckless behavior as a nuclear weapons state and damages its much-touted credentials as a counter-weight to China through the U.S.-led Quad.

First, even assuming this was an accidental launch, India failed to immediately notify Pakistan through the army-to-army hotline. It is alarming that it took India full two days to offer a vacuous explanation and that too, after Pakistan’s military shared granular evidence about the missile’s trajectory, its flight time, and other details. As noted by Clary, this was a violation of India and Pakistan’s 1991 agreement on preventing air space violations “which obligates both sides that if any inadvertent [airspace] violation does take place, the incident will be promptly investigated and the Headquarters (HQ) of the other Air Force informed of the results without delay, through diplomatic channels.” It is indeed possible that, to avoid embarrassment, India did not report the incident to Pakistan hoping that the missile launch or the debris would go unnoticed.

Second, sources in the Pakistan military have informed me that Pakistan has not ruled out the possibility that the launch was an intentional act to gauge Pakistan’s war readiness and/or ability to track India’s BrahMos. If anything, Pakistan’s tracking the missile from its launch until its detonation has demonstrated Pakistan’s capability to track and counter such attacks. There are reports that Pakistan even considered its own retaliatory strike.

Third, the missile reportedly flew at an altitude of 40,000 feet and endangered international and domestic flights both in Indian and Pakistani airspace. One shudders to think about the consequences if the missile had struck a passenger jet mid-flight.

Fourth, the Indian military has a dismal military safety record. From a wrongly closed hatch that damaged a $2.9 billion submarine to the crash of tens of Indian fighter jets over the years due to poor maintenance, after this missile incident India owes the world a thorough explanation of whether it has the required safety protocols in place to stop such incidents from occurring in the future.

Fifth, there have been multiple incidents of uranium theft and trading in India with its citizens having been arrested while smuggling uranium. While India has left no stone unturned to malign Pakistan and make superfluous claims that its nuclear arsenal can fall in the hands of the Taliban, the BrahMos incident raises the specter that Indian missiles and nuclear weapons can one day fall in the hands of rogue trigger happy Hindutva fanatics who have openly called for war with Pakistan.

Over the years, the biggest casualty of India and Pakistan’s animosity has been mutual trust. While India has said that it would conduct a high-level inquiry into this incident, given India’s history of failing to fulfill its promises, Pakistan will most likely reject India’s findings. It is also highly unlikely that India will agree to a joint probe with Pakistan given the sensitivity of data and technology involved. It is, therefore, vital that the United Nations, through one of its bodies, convene an impartial probe into this incident led by weapons experts. If this was an intentional act by India to provoke Pakistan, the global community must unequivocally condemn India for its brazen disregard of international norms. However, if this was an “accidental launch” as claimed, then India must be asked to come clean and prove to the world that its weapons systems incorporate safety protocols and are in safe hands. India owes it to the world to prove that its hands are clean. Indeed, the fate of 2 billion people hangs by a thread.

Hassan Aslam Shad is an international lawyer and a graduate of Harvard Law School. He can be reached at [email protected].