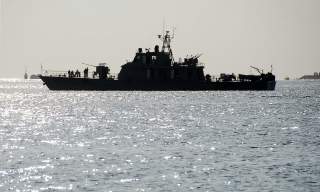 The Iranian navy, in essence, built a brand-new corvette, one ostensibly featuring new missile launchers, in order to replace a vessel that in 2018 collided with a pier.

The two-year effort underscores Iran’s effort to build up its ship-construction capabilities -- and could weigh on Tehran’s ambitious plan to develop a new class of destroyer.

The Iranian navy in August 2019 announced it would return to service the three-year-old frigate Damavand following 18 months of work. Damavand had been out of service since its January 2018 accident at a base on the Caspian Sea.

The collision killed two sailors and significantly damaged the old Damavand. Rather than refloating and repairing the corvette, Iranian engineers actually built a new hull, Offiziere reported. The new Damavand should rejoin the Iranian fleet before the end of 2019, according to Iranian media.

“Imagery available in Google Earth showed sections of the new frigate outside of the fabrication hall throughout 2018,” Offiziere explained. “By December [2018], all sections were brought out of the hall and placed in the drydock for assembly. Between July and August 2019 the vessel was launched and berthed adjacent to the dock where it began fitting out.”

“The fabrication of new hull sections would suggest the vessel is a new-build,” Offiziere added.

It’s possible that shipwrights salvaged some of the old Damavand’s components in order to speed up construction of the new Damavand, according to Offiziere. After all, the damaged ship spent six months slowly sinking at the pier. That likely was long enough for workers to scour the punctured hull of useful materials.

Iranian navy commander Rear Adm. Hossein Khanzadi claimed the new Damavand would feature a vertical-launch system for anti-air and anti-ship missiles, potentially increasing the vessel’s magazine capacity and making it easier for the navy to add new types of weapons as they become available.

“The destroyer has been upgraded and equipped with the latest technologies, making it ready to face the harshest situations in the Caspian Sea,” Khanzadi told Iranian media. Iran refers to its corvettes as “destroyers” even though the ships do not meet international standards for that class of warship.

It’s not clear the new Damavand actually will feature VLS. Iran never has produced a vertical launcher for warships. Iran in December 2018 commissioned the Jamaran-class corvette Sahand at Bandar Abbas. “Handheld video and photography released of the ceremony showed no evidence of the [vertical-launch] system,” Offiziere explained.

Not that Damavand’s disposition would make much difference either way in a shooting war with a major power such as the United States. Even with VLS, the 312-feet-long frigate is small, lightly-armed and likely obsolete compared to the major front-line vessels in the fleets of Iran’s potential enemies.

Damavand is one of three Moudge-class corvettes in Iranian service. Four more reportedly are under construction. Iran operates one ship, Sahand, that is a slightly larger version of the Moudge class.

The seven Moudges and Alvands are the biggest and most powerful surface ships in the Iranian fleet. The Moudges and Alvands each displace around 1,500 tons of water and come equipped with radars and guns plus a few short-range, shoulder- and tube-launched anti-air and anti-ship missiles.

Still, if the Iranian navy did succeed in building a new hull for Damavand and adding VLS, it could provide hope to Tehran that its shipbuilders could construct bigger and more capable warships, ones that come closer to matching American vessels in size if not in sophistication.

Khanzadi on Nov. 24, 2019 announced a plan for a new destroyer class. The admiral said the fleet had established the Negin project to oversee the vessel’s development.

The admiral said the Negin destroyers would displace between 5,000 and 7,000 tons of water and would possess long range and high endurance. Iran frequently announces naval deployments across the Atlantic to U.S. waters but never actually has followed through on the announcements.