Did Russia's Kalashnikov Steal a Shotgun Design from an American Video Game? 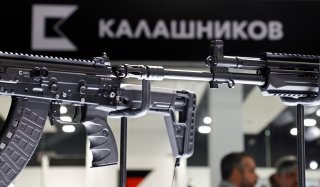 No one expects today's video games to be completely realistic – yet many game developers strive to get the smallest details correct, especially when it comes to small arms. This can include using 3D scans of the gun, and firing the weapons to correctly model the action or record the sounds of the firearm. This has certainly been true of military firearms.

The AK-47 is quite ubiquitous in the world of video games, appearing in hundreds of titles over the past few decades. While few developers have asked permission to model the AK, it seems that the Russian-based Kalashnikov Concern has responded by "borrowing" a design for one of its guns from a video game.

From Games to Guns

Not every video game developer goes to such lengths to accurately model/render a gun. Many early shooters instead simply created weapons that were only loosely based on real-life firearms. However, indie game studio Ward B worked on designs that were far more "realistic" than those of the world of sci-fi. It has strived to create futuristic gun designs that still are based in reality.

"We're looking to have them very, very scientifically explainable," CEO Marcellino Sauceda told IGN.com last month. "There's actually a few weapons we ended up scrapping and not putting in the game because there were design flaws that we weren't too happy with in the end."

The company's commitment to realism resulted in an early 2020 email from Maxim Kuzin, a contractor at Kalashnikov Concern, Russia's largest manufacturer of small arms. Kuzin had reportedly asked permission to turn one of Ward B's fictional weapons into a real-life shotgun. It is believed to be the first time that a gun designed for a game has been turned into mass-production firearm.

It sounded like a huge opportunity for the small development studio – but then nothing happened. That is, until the MP-155 Ultima Smart Shotgun was released. Instead of even acknowledging the game studio's version, the Russian firearms company developed its own version, suggested Sauceda.

While the MP-155 appears similar to the fictional EMP28 Mastodon  the upcoming game Oceanic, Kalashnikov Concern only posted on Facebook that its weapon was "inspired by video games." Both weapons feature a built-in computer that includes camera support, ammunition readouts, and a digital compass.

Kuzin told IGN that the issue was that the game is still a work in progress and that Ward B had not paid the EMP28 Mastodon's concept artists. That could have made licensing difficult or even impossible. In the end, it seems that the Russian firearms giant may have seen a gun design and went from there. It should be noted there are many similar looking firearms, especially in the military world. However, the features of the gun are still close in design.

The Game Will Continue

Ward B went so far as to send Kalashnikov Concern a cease-and-desist order, followed by a DMCA takedown for online posts featuring the MP-155 Ultima. The Russian company fired back by asking for proof of the Ultima's design, and as a result the game studio has withdrawn its takedown requests.

To add insult to injury, Ward B – which has dropped the goal of reclaiming its intellectual property due to the legal difficulties with Kalashnikov operating in Russia – has learned that the Kalashnikov Concern granted a license for the MP-155 Ultima, complete with rail camera and ammo counter, to appear as an add-on for the shooter Escape From Tarkov.

The saving grace is the exposure the situation provided to the upcoming Oceanic, a game that is still in development and likely won't be released until at least sometime later in 2022.

"We are very excited to start rolling at a steady pace," Ward B announced via a blog post. "However, early 2020 we had been approached by a foreign weapon manufacturer with written intentions of using our EPM28 Mastodon design towards a gun kit for their existing firearm with contracts promised to be sent. Unfortunately the responsible party decided to continue production with the use of our EPM28 Mastodon design without Ward B's permission and exclude Ward B from its rightful collaboration. This has forced Ward B to keep a low profile and refrain from sharing new content and information about Oceanic. We are terribly sorry to announce that Oceanic will be moving into private development due to this incident to protect our future property. Once more safeguards are in place, we will be back with a bang. As always we love and appreciate the loyalty and support from you all."

Of course, this wouldn't be the first time that Kalashnikov may have stolen a gun design – there is the whole German StG44 after all!